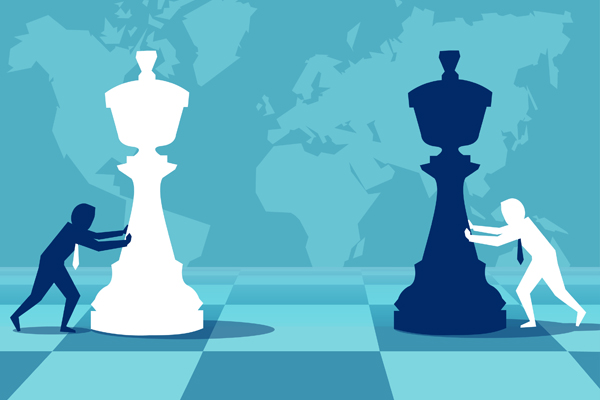 The United Nations Commission on International Trade Law’s (UNCITRAL) Convention on the Enforcement of International Settlement Agreements was adopted by the UN General Assembly on the 20th December 2018. Also known as the Singapore Convention on Mediation, it will come into force when it is signed by at least three States. A signing ceremony for the Convention is expected to take place in August 2019.

The timing of the Convention aligns with significant mediation-focused activity in relation to cross-border dispute resolution. By way of example, the increasing use of mediation windows and multi-tiered dispute resolution with mediation components, particularly in the energy and infrastructure industries is indicative of the increasing use of mediation in international dispute resolution procedures. In the investor-State mediation context, there is considerable regulatory and institutional activity as the following illustrations show: the EU-Canada Free Trade Agreement (CETA) and the ASEAN Comprehensive Investment Agreement (ACIA) contain mediation provisions to encourage amicable settlements in the event of disputes arising; pursuant to the Mainland and Hong Kong Closer Economic Partnership Arrangement (CEPA) framework, a mediation mechanism for investment disputes encourages the use of mediation in cross-boundary investment disputes with both Hong Kong and Mainland institutions and mediators.

So what opportunities can this new Convention offer Hong Kong should China ratify it?

The new Convention elevates the effect of iMSAs into a novel type of legal instrument, representing final and conclusive dispute resolution outcomes which may be recognised and enforced in accordance with international law along with foreign judgments and arbitral awards.

Three Key Features of the

Three key areas of the Singapore Convention are examined in this section.

Scope of the Convention

What the Convention covers

The Singapore Convention provides for the direct and expedited enforcement of international settlement agreements resulting from mediation of commercial disputes (referred to in mediation circles as commercial iMSAs) that have been concluded in writing (Art. 1). For those readers familiar with the New York Convention on Arbitration, it important to note that the term ‘international’ is used to describe MSAs rather than ‘foreign’. In an arbitration context, to define an award as foreign, it must be foreign in respect to something or somewhere – and this is where the notion of a seat of arbitration is useful. The ‘no seat’, delocalised approach of the Singapore Convention on Mediation aligns with the procedurally and geographically flexible and fluid process of international mediation and envisions a dissociation of mediation from the laws of the geographical location where mediation takes place. The approach puts a premium on party autonomy and the ability of parties to self-regulate by the laws and rules they have selected; it rejects the idea of any supervision by a putative ‘seat’ of mediation.

Consistent with Hong Kong’s Mediation Ordinance, the Mediation Convention defines for ‘mediation’ broadly in Art. 2(3) to cover facilitative and advisory dispute resolution processes, to the exclusion of determinative systems such as arbitration and adjudication. This inclusive definition for ‘mediation’ recognises the diversity of mediation practices including mediation facilitated by artificial intelligence algorithms on an online dispute resolution platform. Further it is not necessary for the label, ‘mediation’, to be used for a dispute resolution process resulting in settlement to fall within the parameters of the mediation definition pursuant to the Convention.

What the Convention does not cover

The Singapore Convention does not apply to all iMSAs. First, it has a commercial focus and does not extend to consumer disputes ‘for personal, family or household purposes’, and matters in relation to ‘family, inheritance or employment law’ are expressly excluded by Art. 1(2). These MSAs even if international in nature, prima facie retain their ordinary contractual nature and therefore will continue to be dealt with as part of the private international law of contracts.

Secondly, pursuant to Art. 1(3), it does not apply to iMSAs which:

Here the Convention serves to plug the gaps found in the subsisting private international laws applicable to enforcing iMSAs by providing for exclusions so as to avoid a conflict with existing enforcement mechanisms typically provided through arbitral consent awards (eg by means of the New York Convention as applied to settlements resulting from mediation windows in arbitration procedures) and court orders encapsulating iMSAs (eg by means of the Hague Convention on Choice of Court Agreements as a applied to settlements resulting from certain court-related mediation schemes).

Enforcement Under the Convention

The enforcement mechanism is encapsulated in Art. 3 of the Convention: it may be useful to associate Arts. 3(1) and 3(2) with the metaphors of a sword and shield respectively. Article 3(1) provides that parties may directly lodge proceedings in the courts of signatory States to enforce obligations enshrined in iMSAs against each other (ie, parties to the said iMSA), provided the iMSA complies with the elements established by the Convention in relation to scope (as outlined above), form and evidence, and none of the Art. 5 defences are successfully proven. Thus, signatory States may put in place their own rules of procedure to give effect to the Convention’s expedited enforcement mechanism.

Article 3(2) is in substance a recognition (in the private international law sense) mechanism, dictating that the courts of signatory States shall recognise discrete issues already resolved by parties at mediation, which have been reflected in their concluded written iMSA, and dismiss or strike them out if they were raised for a second time in court upon application by a party (or parties) to the iMSA. This mechanism is akin to private international law recognition of foreign court judgments and arbitral awards. However, it is noteworthy that drafters of the Singapore Convention deliberately avoided referring to the term ‘recognition’ in Art. 3(2) owing to objections from several continental European nations whose legal systems confine the application of private international law ‘recognition’ to foreign judgments and arbitral awards (ie, ‘recognition’ of iMSAs, which are essentially private contracts between parties, are thought to be incompatible within their legal system). Nevertheless, the function of ‘recognition’ has been encapsulated in Art. 3(2).

Parties applying to the court of a signatory State to enforce an iMSA under the Singapore Convention must generally do the following:

b) Provide evidence that the international settlement agreement was a result of a mediation process (Art. 4(1)(b)).

The formalities are minimal. It is noteworthy that the “in writing” requirement is also satisfied if “its content is recorded in any form [...] [including] an electronic communication if the information contained therein is accessible so as to be useable for subsequent reference” (Art. 2(2)). This envisages the case that iMSAs which were concluded through online dispute resolution forums (eg, mediation through text messaging, online conference calls and dedicated online dispute resolution platforms) may also be subject to enforcement under the Singapore Convention. However, parties who have participated in online dispute resolution must note that their concluded iMSA must be endorsed with a recognised electronic signature (Art. 4(1)(a) read with Art. 4(2)), whilst furnishing proof to the competent enforcement authority of a signatory State that it was a product of mediation.

In relation to the second point, to prove that the iMSA resulted from mediation, parties may produce a mediation agreement, the mediator’s signature on the settlement agreement, a separate document signed by the mediator confirming that mediation was carried out in respect to the settlement agreement concerned or an official attestation by the institution or dispute resolution service provider administering the mediation (Art. 4(1)(b)(i) – (iii)). Furthermore, there is a ‘catch-all’ provision that leaves the relevant court with the freedom to decide what other kinds of evidence are acceptable as proof to show that the iMSA sought to be enforced resulted from mediation (Art. 4(1)(b)(iv)).

Article 5 of the Singapore Convention establishes exhaustively a list of defences to the enforcement of iMSAs. Courts may allow parties to resist enforcement if one or more of these grounds are proven. There are four types of grounds for refusal:

1. Private law-related grounds for refusal: these are defences recognised in contract law and are already applied to mediation according to the national law of many jurisdictions.

2. Mediator misconduct-related grounds for refusal: these are two new grounds for refusal which have already attracted significant attention. They put the spotlight on mediator performance and will likely lead to a closer scrutiny of applicable mediator standards, ethics and codes of conduct and the role of the institutions that issue them such as HKMAAL. With the introduction in the Convention of Arts. 5(e) and 5(f), attention would wisely be directed towards refining and strengthening norms and standards for mediator credentialing and ethical practice that are well-established under HKMAAL.

3. Public policy: well-known to arbitrators, this ground of refusal is directly drawn from the New York Convention, and would be applicable under exceptional circumstances because it functions as an escape mechanism for the courts of signatory States to refuse to enforce iMSAs.

4. Subject Matter Not Capable of Settlement by Mediation: depending on the law of the jurisdiction there may be certain areas which are considered to be not amenable to mediation.

The specific defences are set out in the following table. (See below)

The Singapore Convention lends mediation the regulatory legitimacy needed to become a major player in international dispute resolution practice. Given Hong Kong’s considerable investment and expertise in both domestic and cross-border mediation in terms of infrastructure, technology, institutions, regulation and people, the new Convention offers Hong Kong the opportunity to close the ‘enforcement’ gap. With the Singapore Convention ratified, Hong Kong mediators and lawyers will be well-placed to take advantage of an anticipated rise in cross-border commercial mediation, especially with Hong Kong’s rapidly growing expertise in ODR and investment mediation. From a users’ perspective, the Convention promises a risk management mechanism accessible in terms of its flexibility and affordability to cross-border business players: from traditional large multi-national corporations, to sole traders, and also to start-ups. 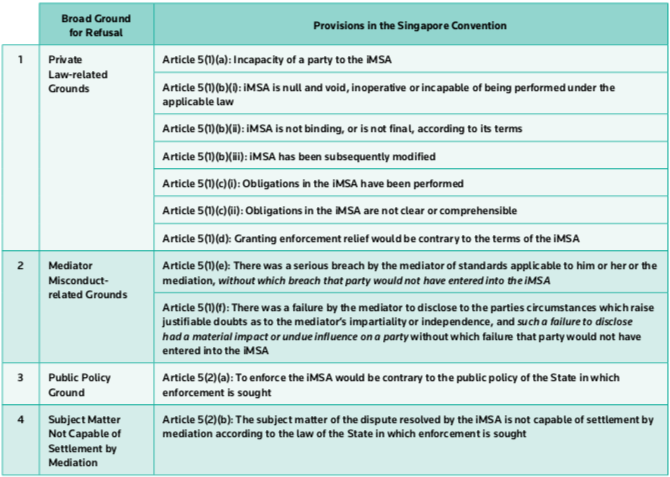 Professor Nadja Alexander is Director of SIDRA at Singapore Management University. She is also Honorary Professor at the University of Queensland, Australia, a Senior Fellow at Mitchell Hamline Law School, United States, and a HKMAAL accredited mediator.

Nadja works as an adviser and conflict intervener in diverse legal, corporate and development settings. Clients include the World Bank Group and governments and corporates in Europe, Asia, Australia and Africa. Nadja also participated in the UNCITRAL deliberations on the Singapore Convention. Her books includeInternational and Comparative Mediation, Global Trends in Mediation, EU Mediation Handbook and Hong Kong Mediation Manual.