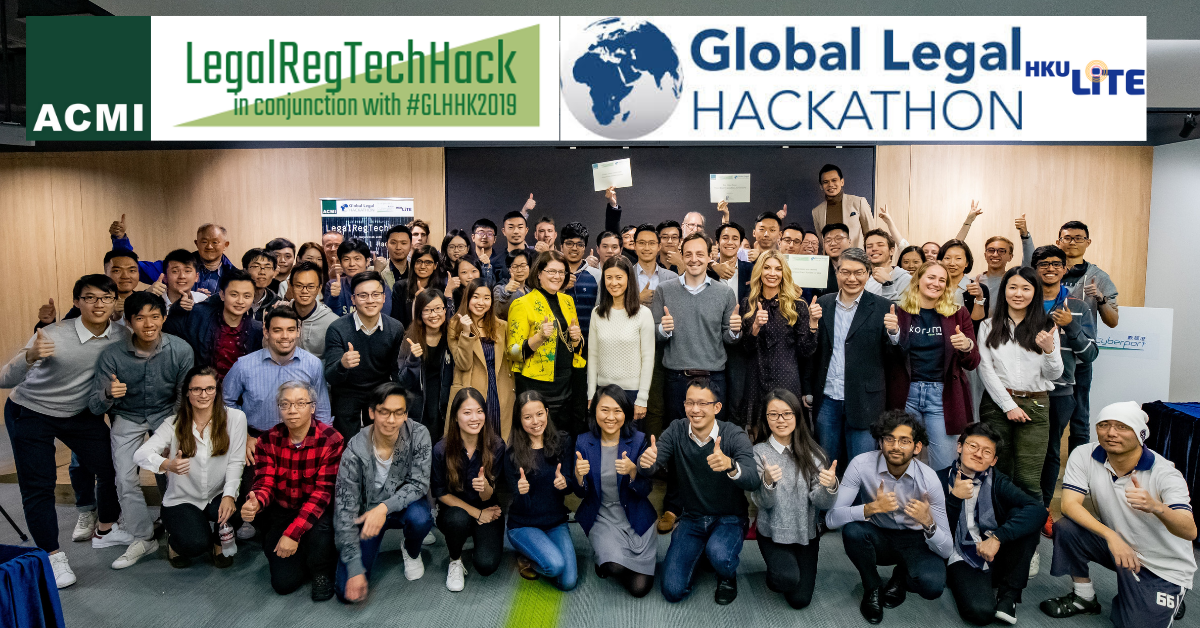 Global Legal Hackathon (GLH) has been dubbed by some as the Olympics of legal hackathons.  Only in its second edition this year, GLH attracted over 6,000 lawyers, technologists, students and designers from 46 host cities in 24 countries from around the world to simultaneously participate on February 22-24, 2019.

ACMI was once again the Hong Kong host and organiser of LegalRegTechHack in conjunction with Global Legal Hackathon to promote the creation of innovative technology solutions for the legal and regulatory industry to address public benefit as well as private sector challenges.

At Hong Kong’s first-ever legaltech and regtech hackathon last year, Decoding Law was the top team that went on to the finale in New York City and won the Public Benefit Award for its browser plug-in and chatbot that allows the general public to better understand legislation.

Following from the success of this inaugural hackathon, ACMI’s managing director and founder, Brian Tang was recruited  as the founding executive director of LITE Lab@HKU.  This is Hong Kong University’s new interdisciplinary and experiential learning programme led by the highly ranked Faculty of Law to foster law, innovation, technology and entrepreneurship (LITE).

LITE Lab@HKU.  was also a co-organiser for this year’s hackathon that was held at Cyberport, with an increasing number of supporters across Hong Kong’s legal innovation ecosystem. The hackathon opened on Friday evening with welcome speeches from Freshfield’s China chairman, Teresa Ko, Baker & McKenzie’s TMT partner, Paolo Sbutonni, DLA Piper’s TMT senior associate, Frankie Tam, Thomson Reuters’ Head of Proposition – Core Law, Robb Head, and Cyberport’s Fintech Lead, Charles Lam.  After initial networking over a pizza dinner, interested team leaders were given the opportunity to make 60-second pitches to attract team members.  The aim was to form a balanced team between lawyers, technologists and designers to validate ideas and rapidly develop prototypes over the rest of the weekend with final pitches to be made on Sunday afternoon.

This year, 45% of the over 80 Hong Kong participants had a legal and compliance background, whereas 35% had computer programming skills. Overall, 57% were students and a quarter had more than 5 years’ experience, with 6% having more than 20 years’ experience. Furthermore, the overall Hong Kong Global Legal Hackathon community was the sixth largest in the world, behind Brazil, Northeast of the United States, the United Kingdom, Kenya and Melbourne.

The judges for the final pitches at the conclusion of the hackathon were curated to reflect the breadth of support for the development of lawtech and regtech in Hong Kong. They comprised Theresa Johnson, Hong Kong’s Law Draftsman from the Department of Justice; Lin Shi, President of the Association of the Corporate Counsel – Hong Kong (ACC-HK), and Joint Head of IPO Vetting at the Stock Exchange of Hong Kong, and Ross Stewart, Allen & Overy ICM partner and advanced delivery board representative (APAC).

Allen & Overy’s Ross Stewart commented: “The LegalRegTechHack is an excellent snapshot of the rapidly evolving and converging worlds of law, regulation, deal-making and innovative technology. We are delighted to see law firms and industry associations coming together to support our home-grown technology start-ups.”

Hong Kong's winners of both the best public benefit and overall award created Access Our Community (AOC), a pro bono opportunities matching platform for lawyers (private practice, in-house, or otherwise).  The platform offers a single portal for lawyers to identify opportunities that align with his or her interests, skills and availability in real-time.  AOC simultaneously aims to partner with and provide a technology solution for legal services non-profits and clearinghouses to more efficiently reach their network of pro bono lawyers and increase the capacity of these critical organisations in their respective missions for increasing access to justice.

Skills-based volunteering has become a focus for many corporates and law firms to make more impactful and meaningful contributions to the local community in which they operate. Some bar associations like New York State also have pro bono requirements for law students seeking admission and sets targets of 50 pro bono hours annually for members.

AOC’s founder Mary Ho, an active member of the ACC-HK Pro Bono Committee, was inspired by her  own experiences as Legal Counsel for UBS' Wealth Management Division where she developed their  in-house pro bono framework.   She realised that her colleagues were interested in pro bono opportunities if presented to them.  However, she also realised that the current process of identifying opportunities was cumbersome because of the heavy reliance on email.  In one instance, Mary was disappointed to learn after several emails that a matter that her colleague was interested and available to work on was already matched, leading her to consider how the process could be streamlined.  As soon as Mary learned of the Global Legal Hackathon, she knew it would be a great opportunity to test out her idea.

AOC represented Hong Kong for the Global Legal Hackathon virtual semi-finals making a video submission, reviewed by a panel of judges from around the world.  AOC is honoured to be one of 12 finalists to pitch in New York on May 4th.  AOC is competing for the Global Rise of Women in Legaltech (GROWL) award that honors the best female-led team.

In developing the final pitch, AOC team members have reached out to a range of potential users in Hong Kong, Singapore and Australia to consider how the platform can meet the needs of end-users at legal services non-profits, law firms and law departments of corporations in the region.  AOC was also fortunate to be introduced to members of the Hong Kong Law Society and the administrators of the Hong Kong government’s Duty Lawyer Service and Free Legal Advice Scheme to explore how technology could enhance the pro bono legal services provided through these channels.

Nicholas Chan,  Assistant Director of Administration, Chief Secretary for Administration's Office for the Hong Kong government shared these thoughts after his meeting with Mary Ho and Wei-wei Ng, from AOC: “We see much potential and merit in the adoption of technology solutions such as the AOC platform in the provision of pro bono community legal services.  By effectively streamlining the process of matching and linking the pro bono lawyers with the service users, the AOC platform will not only enhance public access to legal advice services, but also bring convenience to participating lawyers and service providers.”

Beyond the hackathon finals, AOC is researching the viability of creating a social enterprise to ensure sustainability of building its platform. Other similar technology solutions for pro bono legal opportunities emerged in the US and Australia, which have attracted substantial impact investment, including from Google, Microsoft and a ‘Shark Tank’ (TV show) investor, showing that AOC's value proposition serves a need that is recognised globally.  AOC sees a niche for the Asia market and sees potential use for its platform in other under-served markets such as Eastern Europe and the Middle East.

Mary Ho described the experience as “transformative”: “I joined the hackathon with no expectations other than to explore my idea and to learn about tech development in the legal industry. After winning the hackathon, I've been humbled and amazed at the level of support the entire Hong Kong pro bono legal community has provided to help develop AOC.  I hope we can help the growth of the pro bono legal ecosystem in Hong Kong and beyond by developing a solution to build capacity for all stakeholders and increase access to justice for those in need.”

Philip Andrew, AOC's lead programmer, shared: “I am involved in the legaltech space and AOC's concept really interested me as it had a realistic use case, business justification and has the fundamental purpose of helping the community.”

"Building a single platform for the distribution of pro bono work is both innovative and practical,“ congratulated Hong Kong’s Law Draftsman Theresa Johnson. “It would have application beyond Hong Kong and the Access Our Community team is to be congratulated on its concept and wished every success in New York."

ACC-HK President Lin Shi added: “The hackathon successfully attracted legal and tech professionals and students to work together and make laws and regulations more accessible. It was very inspiring to see the ideas that the teams had to innovate the legal and regulatory sector.”

PCLL student Charlie Wong agreed: “Given only a weekend to translate an idea into a prototype is daunting to lawyers and law students who do not code. It is truly exciting to be part of events like this that provide a platform for motivated individuals to contribute with confidence.”

Brian Tang, who was previously in private practice at Sullivan & Cromwell in New York and in-house at Credit Suisse in Hong Kong and now focusses on fintech, regtech and lawtech through ACMI and its newly launched incubator LEXi, said: “We believe that all lawyers should experience firsthand the magic and possibilities of hackathons, regardless of whether you are a first-year law student, or 20-year veteran partner or general counsel. Only then can innovative solutions to real world pain-points be co-created to benefit our clients and communities.”

Since the hackathon, a Law and NLP group has emerged from its participants as part of the growing LITE Lab@HKU.  community. In March, Brian also curated and organised through LITE Lab@HKU.  the  Smart Legal Contract Challenge as the Hong Kong Node for the Legal Hackers’ worldwide Computational Law & Blockchain Festival that was hosted at HKU’s innovation and entrepreneurship hub iDendron, with trainers and founders from world-class protocols OpenLaw, ContractPen/ Accord Project and Integra Ledger. Projects that emerged include an intellectual property and programming management system (led by the general counsel of a television company), internet of things (IoT) enabled sales contracts and tokenization of art.

For the video summary of the 2019 LegalRegTechHack in conjunction with Global Legal Hackathon Hong Kong 2019, see https://youtu.be/OtsurVp_6fA . Parties interested in joining the LITE Lab@HKU.  community can register for updates at https://lite.law.hku.hk/ . 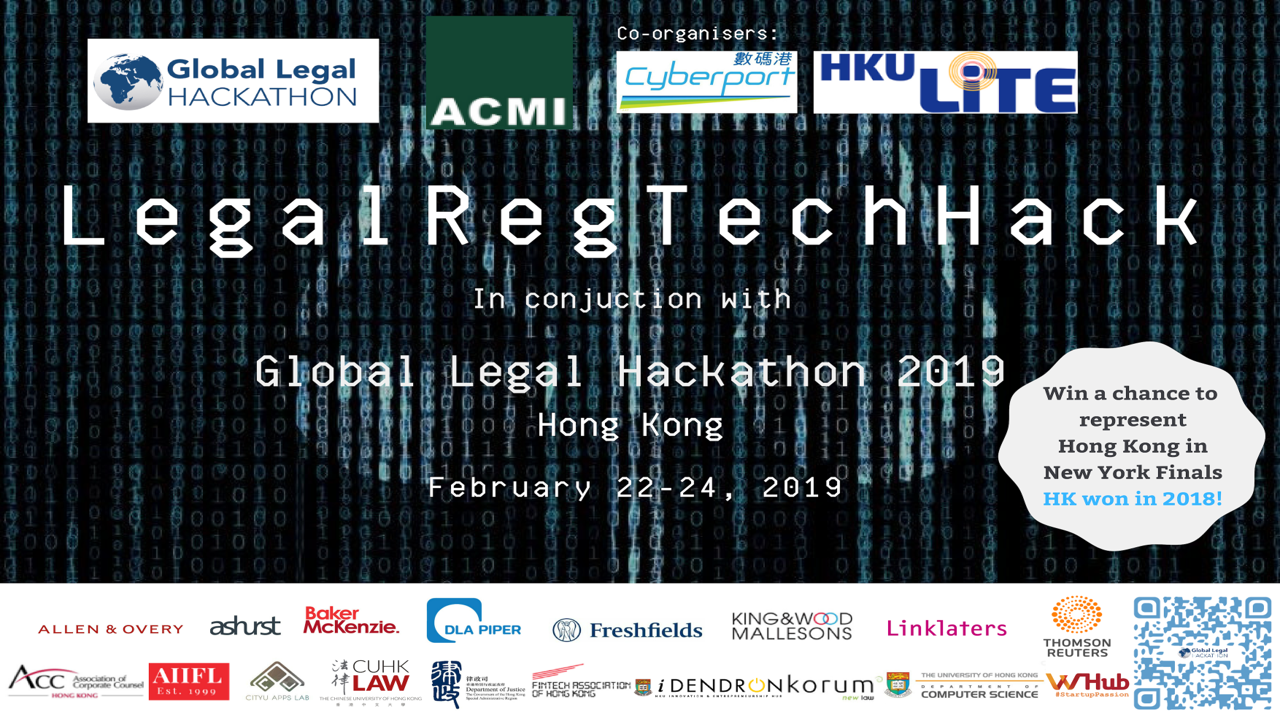 Brian W Tang is founding executive director of LITE Lab@HKU to foster law, innovation, technology and entrepreneurship (LITE) at the University of Hong Kong Faculty of Law and managing director of ACMI. Brian was previously at Credit Suisse in Hong Kong and at Sullivan & Cromwell on Wall Street and in Silicon Valley where he advised on some of the world’s largest and rst-ever nancial services and technology capital markets, M&A and project nance transactions. He is co-chair of Fintech Association of Hong Kong’ Regtech Committee and was on Hong Kong Corporate Counsel Association’s Executive Committee. Brian graduated from The University of Western Australia with a combined Bachelors of Arts and Law (with honours) and from New York University School of Law with a Masters of Laws.