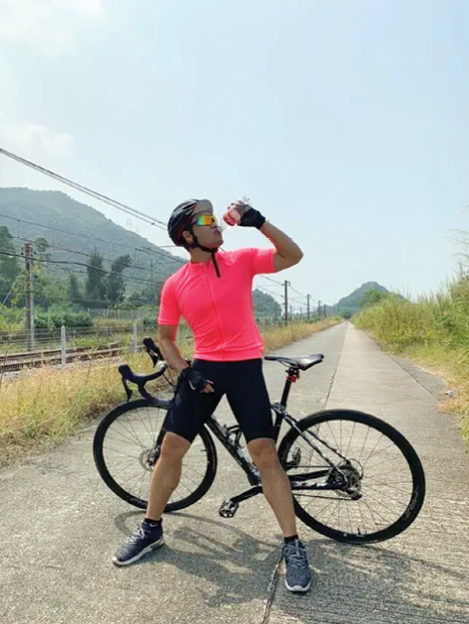 DLA Piper’s Arthur Tso spends his free time riding along Hong Kong’s best cycling routes. He took to two wheels in Thailand on a cycling holiday a few years ago and now he cycles every week with friends to stay fit and soak in Hong Kong’s natural beauty.

“Saturday is my big cycling day,” says Arthur. “Some of my friends who are really hardcore go at five or six in the morning on weekdays as well, but Saturday is when I can find the time to get away from work. We typically ride for two to three hours, avoiding the traffic and finishing before noon.”

At DLA Piper, Arthur is a partner in the Asia capital markets practice based in Hong Kong where he primarily advises corporates, shareholders, investors, underwriters and sponsors on initial public offerings (IPO) on the Main Board of the Hong Kong Stock Exchange, pre-IPO investments, mergers and acquisitions and corporate restructuring.

Cycling rode into Arthur’s life as a new hobby. It allows him to meet new people and make the most of his leisure time, but it has also taught him a thing or two about endurance and strategy. Arthur hopes that within the year he can build his endurance on the road and meet his target to cycle 90km in one day.

Arthur had his first introduction to road biking in the summer of 2019 when he went on a trip to Phuket with a group of seasoned cycling buddies. The four-day trip was a testing experience on the road and the group was supported by two support vans that carried their luggage and bike equipment.

“The twelve of us were on the road for a hundred or more kilometers a day, for three days straight. It was from eight in the morning to five in the afternoon every day, before arriving at the next hotel.”

After each day’s grueling activity, Arthur and his group spent their evenings in the hotels, cooling off in the pool and drinking some beer, before starting all over again the next day.

“It was too tough for me at the time,” Arthur admits, “because I had only just learned gear-switching on a road bike, and I wasn’t ready. Before the trip, I could manage 30km a day, but suddenly I was doing more than 100km. It was a shock to the system, so I would sit occasionally in the support van so I could catch up with the rest of my group.”

“There were three tour guides in our group, and we separated into three groups depending on capabilities. No prizes for guessing which one I was in!”

But this experience stuck with Arthur. Once back home in Hong Kong, cycling became his new hobby. “I became a cyclist because of this trip. I knew that if I could do that, I could do anything. And I could definitely cycle shorter distances for fun on the weekends.”

After the road biking trip to Phuket, Arthur bought his own bike so he could continue cycling with his friends. Since then, he has been learning about gears, endurance and stamina. 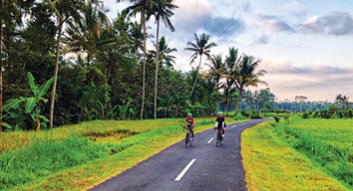 On holiday in Thailand

Arthur is a road biker. “It’s a particular kind of biking where you only do it on roads, because it’s all about speed, and about drafting when you’re in a group of cyclists.”

Arthur and his friends like to make sure they are well prepared for the journey. “We will usually have two bottles filled with water or lemon water. Along the way we replenish and eat breakfast. There are plenty of small shops along the road in the countryside in the mornings that offer noodles, milk tea, and more.”

They meet up in the morning at the start of one of their routes. There are many all over Hong Kong, but Arthur says one of his favourite routes starts at Disneyland and ends in Tung Chung.

Sometimes, instead of going to Tung Chung they go to the airport and do laps back and forth between Disneyland and the airport. Arthur says that two of those laps in a day can add up to 80km.

“I can only do 50 to 60km at my current level, but even that is way above when I first started two years ago. Back then I could only do 15 to 20km, so I can see that I’ve already improved a lot.”

“We are usually quite tired after a few hours of road biking—too tired, even, to eat a big lunch! But that doesn’t mean we can’t relax.”

“A couple of us will often need a massage afterwards because it’s pretty tiring. My friend and I go to Central quite a lot, where we’ll get foot massages. Otherwise, we’d go to the Cricket Club and just relax there.”

Arthur says cycling can be a challenge in the sultry weather while wearing a mask. “It’s difficult to cycle when it’s hot,” he says, “so I’d much prefer doing it earlier and later in the year, not the middle. But last summer, because of COVID, we had to wear masks while cycling, and that made breathing very difficult.”

Hong Kong’s COVID restrictions were stringent during the summer of 2020, when cases were at their highest in the city.

“I’ve also been travelling in Mainland China during the past four months. I traveled to fifteen cities in that time, so cycling has taken a backseat.”

“Much of my sporting time was spent playing tennis with clients and prospects on weekends instead.”

The Joys of Cycling

There is so much to learn about cycling, as Arthur describes it. “There’s a sort of cyclist sign language,” he says, “and I learned it the hard way in Thailand, in a baptism of fire. In Hong Kong we have relatively safe roads, but in Thailand you’re on the highway and there are some rough sections with potholes and cracks that make the road hard to navigate.”

Arthur enjoys cycling in Hong Kong though to other major Chinese cities. “It’s better than Beijing, I would say. Compared to Hong Kong, the roads in Beijing—or really, many roads in Asia’s cities, are not maintained frequently enough to make cycling stress free. In Hong Kong, we are truly blessed to have not only an expansive countryside but also flat roadways that make cycling here a safer experience.”

Hong Kong is scenically beautiful too, from its lush green mountains to its vibrant blue seas stretching miles away, broken up only by many islands.

“Another favorite route is the cycle to the east dam in the Sai Kung region,” Arthur says. “If you start early you can take in the sunrise. Waking up at 4:30am, driving to the car park, then riding to the east dam for like 20 or 30km to see the dawn.”

“The last time I rode that route was on New Year’s Eve— the first sunrise of 2021—so that was pretty meaningful. Slightly cloudy but it was worth it; the view over the ocean was beautiful in the early morning sunlight.”

Like many things, cycling has taught Arthur lessons that he has taken and applied to his own life, for work and personally.

“One of the things that people don’t realise about cycling is that you don’t actually need to be first the whole time. You need to be strategic. If you draft behind someone, you’ll save around 20% of your energy. And you can wait until the end to overtake and win the race. You see this applied all the time in the Olympics, actually.”

Arthur has spent a lot of time watching road biking competitions since he started cycling himself. He didn’t find it exciting in the past, because he didn’t appreciate how races were won. He thought it was just about speed, when in fact it was about endurance and strategy.

“People think that as long as you are at the front, you’re not going to lose. But typically, those people are the ones who fall behind in the last bit of the race going to the finish line. So it’s all about forward planning.”

Some of the races are team races, and in those cases it’s about teamwork. “Sometimes you switch positions to save each other’s energy when you’re in a team. And you need to communicate even while on a bike. You need to understand the weaknesses of different people—some might be better ascending, others better descending.”

“It’s all about communication when you’re in a team, and I think that can be applied to various things that include teamwork. In the biking world, like everywhere else, successful teamwork is what it takes to win.” 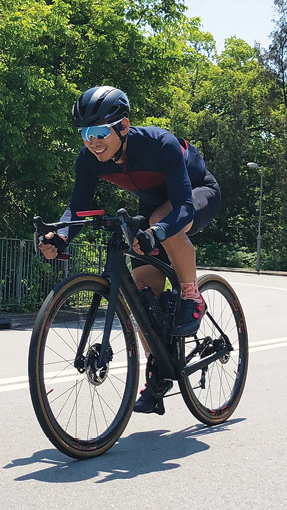 On a High Note
Written in History
Leaving an Impression