Lai Chi Wo, a village of nearly 400 years old whose name literally means “Lychee Nest”, rests deep in Plover Cove Country Park near the border of Sha Tau Kok, within sight of Mainland, China. While it no longer produces the delectable, red-skinned fruit that first gave this rural community its name, this enclave is still renowned for its rich Hakka culture and marine heritage. Its beach was designated as a Site of Special Scientific Interest (“SSSI”) and the entire village is a part of the Hong Kong UNESCO Global Geopark.

In spite of being nearly abandoned for decades, this village still hosts over 200 traditional Hakka houses that are surrounded at the back by feng shui woodlands and enclosed at the front by a feng shui wall. According to legend, the feng shui wall was built on the advice of a feng shui expert around 100 years ago to retain wealth and keep out evil spirits. Soon after the wall was built, the community’s luck dramatically improved, which fortified the local villagers’ belief in feng shui and their dedication in protecting the woodlands and banning its destruction.

As for the walled village, it comprises densely arranged houses, which were built in three vertical and nine horizontal alleys. The village houses, which boast Hakka-styled vernacular architecture, have distinctive Hakka tiled roofs, metal bar protected windows and ram earth and brick walls. The ground floor of a Hakka home typically contains a kitchen with a fire wood stove and chimney on one side and a bathroom on the other that are shielded from each other by a short wall; these are Character Defining Elements (“CDE”) of a Hakka-style home and are located near the structure’s entryway. Adhering to feng shui belief, the walled village is positioned west and faces east, with the main gate on the east and the side gate named “west gate”. According to village tradition, brides that married into the village were only allowed to enter the walled village through the west gate on their wedding day.

At its prime in the 1950s, Lai Chi Wo comprised 450 residents, who primarily supported themselves by farming, fishing and selling bamboo products. But by the 1960s, many villagers decided to move to urban areas or immigrate overseas, causing the population to sharply decrease. By the 1980s, Lai Chi Wo’s school was closed because there were no more students left to attend.

Despite its fall into obscurity, Lai Chi Wo is once again attracting attention and inspiring hope as the site of an experimental revitalisation project, which was launched in 2013. It is managed by the Policy for Sustainability Lab of the University of Hong Kong, partnered with the Hong Kong Countryside Foundation, Produce Green Foundation and Conservancy Association with funds from HSBC. With the help of this project, some local villagers have moved back to farm and receive visitors. In December 2016, through another new project funded by the Hong Kong Jockey Club, a project team under the Hong Kong Countryside Foundation is proceeding to restore some of the old houses within the walled village. Their goal is to revitalise the village by referencing accredited international guidelines. Currently, they are studying and identifying the CDE of the village, which include many of the Hakka-style architectural features described above. Other teams and stakeholders are working to revitalise the village through rehabilitating the abandoned farmland. Both projects are unique in that they take a multi-stakeholder, sustainable development approach in their attempts to transform Lai Chi Wo into an eco-agriculture, environmental education and heritage conservation hub. While these initiatives have shown much promise, they have also been met with a number of challenges.

The first obstacle came in the form of convincing the villagers and the Government that there are alternative options in rural development. Sources report that development of most remote villages within the boundaries but not part of country parks themselves has mostly stalled because the conflict between conservationists who want to protect these areas and landowners who are afraid of losing their development rights cannot be resolved.

Project leaders and participants have also faced a number of regulatory hurdles that many claim highlight the need for more flexibility in laws to ensure that businesses developed in small, rural communities can survive and thrive. For instance, Mr. David Au, the Project Director with the Hong Kong Countryside Foundation who is working with the Foundation and local villagers to restore the houses in a historically accurate way, noted that while keeping restoration work in line with the CDEs of the village, the houses have to be restored to satisfy modern hygiene, structure and fire safety standards so the restored structure will comply with current laws regulating guest houses for tourists. Mr. Au hopes that once restored, these Hakka-styled guest houses will attract a variety of users and tourists to visit Lai Chi Wo so that they can participate in the Hakka experiential learning programmes that will be a part of the village revitalisation project.

Challenges aside, when it comes to the future development of Lai Chi Wo, most villagers and stakeholders share the same aspiration of opening up the village and sharing it with the general public.

Designed to maximise enjoyment of the natural scenery and appreciation of the scientific value of the Geopark sites, Hong Kong UNESCO Global Geopark has designed a boat-tour route and multiple land-tour routes to access Lai Chi Wo. We took the boat tour route from Ma Liu Shui, which passes through Tolo Channel to Bluff Head, where you can see inter-layered red and white rock strata made up of the oldest rocks found in Hong Kong. After passing along the fire-red Hung Shek Mun coast, you enter the mirror-like Double Haven, where you can attempt to find its ‘Six Treasures’. The tour then heads on to Lai Chi Wo, where we exited to visit the Lai Chi Wo intertidal zone, the walled village and feng shui woodlands.

Upon arriving, Lai Chi Wo seemed just as magical as it had been described – bursting with local Hakka culture, from the flavourful dishes we ate (which included congee; braised pork belly with black fungus; Hakka salted chicken; and a variety of stuffed buns and local desserts, such as sweetened tofu) to the restored temple and monastery we visited to the walled village and abandoned houses we explored. Along the way, local villagers warmly welcomed us and openly spoke to us about the local culture and their ties to Lai Chi Wo. A local contingent of dogs, one of whom goes by ‘Panda’, escorted us on every leg of our journey. We also walked through a portion of the Geopark and the feng shui woodlands, which apparently is home to more than 100 varieties of plants. Most impressive, though, were the old and valuable trees, such as the ‘hollow’ tree, the ‘five-finger’ camphor tree in the woodlands, and the mangrove forest in the intertidal zone.

Before leaving Lai Chi Wo, we visited a portion of the revitalised farmland, where the project is re-establishing around 5 hectares of farmland and an irrigation system. Eco-pools and wetlands have been integrated to form a mosaic of farming habitats to nourish agricultural biodiversity. Low ecological impact measures are also being employed: protection nets and solar powered fences are being used to minimise crop damage by wild animals. Other experimental trials, such as biochar and phytoremediation, are also being carried out. Currently, two crops of rice are being raised per year and a variety of vegetables are being harvested seasonally.

My visit to Lai Chi Wo was a fascinating and inspiring journey that provided me with the opportunity to learn about a rare marine ecosystem, sustainable farming practices, architectural restoration and the vibrant Hakka culture. I was also able to see first-hand the power and effectiveness of a dedicated group of people, who aspire to revitalise a historically and ecology rich, rural community. Lai Chi Wo has certainly earned the right in my books to be called Hong Kong’s hidden gem. It is hoped that these projects unlock this village’s full potential and restore Lai Chi Wo to its former prominence.

* Many thanks to the Hong Kong Law Society and the Hong Kong Countryside Foundation, including its Board Director, Mr. Huen Wong, its Project Director, Mr. David Au, and its Manager, Ms. Teresa Leung for arranging the guided tour and providing such a memorable visit to Lai Chi Wo. 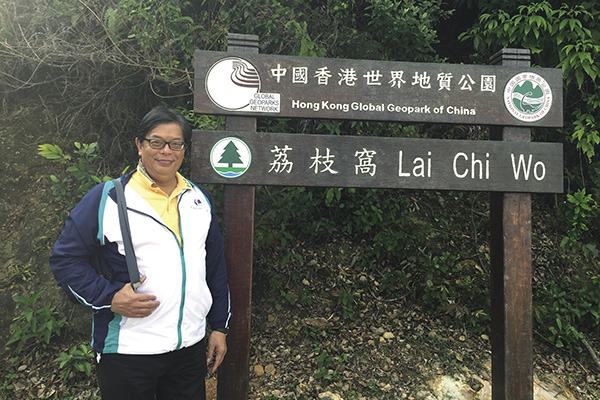 “I have long admired the natural beauty of the New Territories countryside, which has only grown stronger throughout the years. From the work I undertook in my first job as a land executive with the Hong Kong government to my support for the Lai Chi Wo revitalisation project as a Board Director of the Hong Kong Countryside Foundation, it is heartening to see so many generous and like-minded supporters from all quarters of the community.” 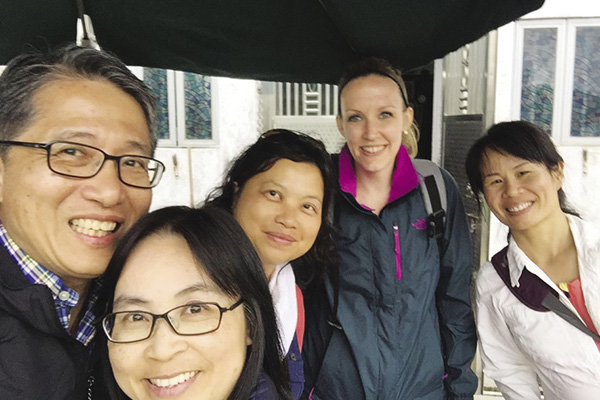 "Fond memories of staying in Lai Chi Wo with my grandparents as a child motivated me to move back and work with the Sustainable Lai Chi Wo project as a volunteer. In 2016, after two years of communicating with village representatives and seniors, I established HakkaHome-LCW, a social enterprise to support sustainable development in the region. I also run my own personal café in Lai Chi Wo that is not related to HakkaHome-LCW. Running the café is half a promise to my grandpa (he used to run a local store named Foo’s Store for some 20 years – his name is Foo) and half my intention to bring in sustainability concepts, such as Local, Fair Trade & Organic, to the village." 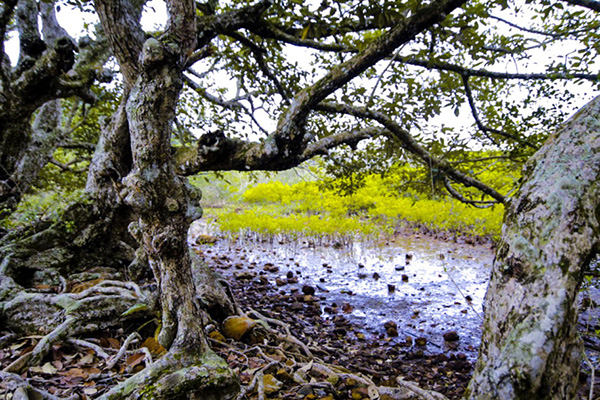 Local couple who has return to the village to sell a variety of locally grown and produced products. 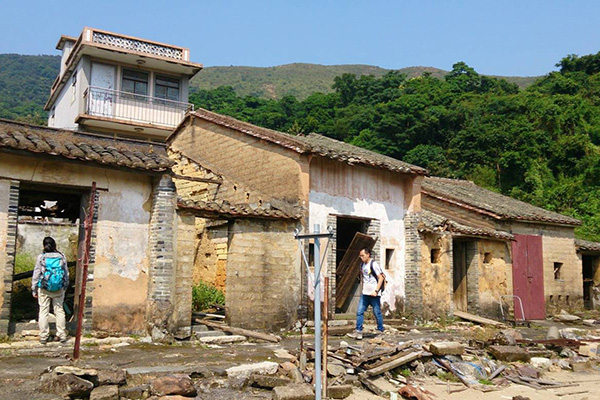 Houses selected to be restored in the Hakka Village in Lai Chi Wo (before). 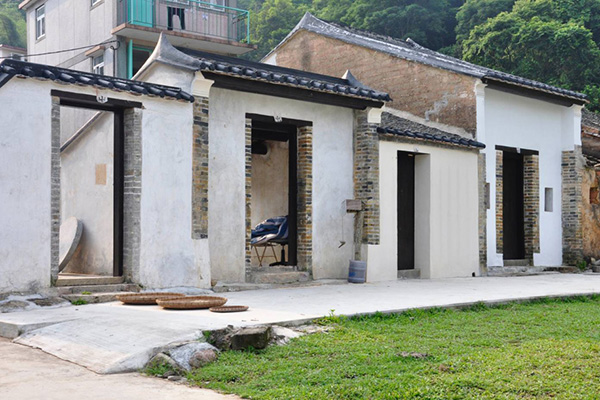 Houses selected to be restored in the Hakka Village in Lai Chi Wo (after).