July 2020
Lawyers at Leisure
Stuck in the Middle with You I’ve kept order among Cambridge dons when they’ve overstepped the mark on the touchline while students have been kicking lumps out of each other. I’ve refereed international players in Cuba’s national stadium. I’ve been offered a police escort away from the ground to protect me from angry triads. Life as a football referee is rarely dull, I can tell you.

I got into refereeing as a teenager growing up in London. As a footballer, I had limited talent – OK, I was rubbish – and refereeing seemed, on the surface, to be easier. While helping run my youth club team I had the opportunity to go on a refereeing course. It was demanding but I passed the exams and, at age 16, entered a brave new world of muddy pitches on Hackney Marshes, wound-up players and irate spectators.

I began as a linesman, now known as an assistant referee, in the Southern Olympian League. The standard was good and the players as passionate and enthusiastic as anything you would see at the top level. Soon, I was taking charge of matches, lots of them. One game Saturday, another on Sunday and often a midweek fixture as well. I was getting paid for it and a busy week could see me pocket 50 or 60 pounds, useful income for a lad about to head off to law school.

I carried on refereeing local league football while studying law at City of London University but stepped back from that when I moved to Cambridge to complete my Masters. Instead, I found myself taking charge of “Cuppers” – keenly contested knockout matches between the different colleges under the auspices of the historic Cambridge University Association Football League. I remember being in the middle for some semi-finals and a final. Those were great days and I thoroughly enjoyed the experience.

As a legal professional, the attractions of refereeing are obvious: enforcing the law, trying to be fair and judging each case on its merits. Was there intent in that late tackle? Was that a deliberate handball? Of course, my daytime job usually involves taking one side and acting for my client whereas refereeing allows me to be the judge and dispense instant justice. It’s a role I relish.

I arrived in Hong Kong in August 1981 and was soon taking charge of matches at Hong Kong Football Club, where I became a member. Within a short time, the Hong Kong Football Association accepted my refereeing qualifications and I started officiating at Second Division matches. Often these would be between two local teams with little or no English but, football being the universal game, we managed just fine. I remember after one encounter, which had featured some tasty tackles and a few cards, being offered an escort away from the ground by police. I asked why and they replied: “There are some men over there who would like to kill you!” Apparently some of my decisions had not gone down well with the local triads.

I kept up the Second Division matches for a couple of seasons before moving on to the Legal League. However, most of my refereeing has involved Friday evening social matches at Football Club. Don’t let the word social fool you, though, these games feature some players who were very good in their prime and their competitive instincts come to the fore.

I’m often asked about complaining players and how I deal with them. I’m all for some banter but when it crosses the line into dissent I have zero tolerance. For this, I’ve developed a unique card system which serves me well. Aside from the standard yellow and red, I keep an orange card in my pocket and flourish this when a player is too mouthy. It means he has to go off, with a substitute allowed, and I let him back on if he apologises.

My involvement at Football Club led to my becoming temporary Chairman of the Soccer Section at a time when they wanted to compete in the First Division, a complicated matter as HKFA rules required top-flight teams to be fully professional. This role was as challenging as any match I’ve ever officiated. A consequence of this was representing our players before the HKFA Disciplinary Committee when my advice to the offender – “Keep quiet and let me do the talking” – invariably helped him escape with a fairly lenient punishment.

It was through Football Club that I got to know fellow member Henrik Lorenz and ended up refereeing on the other side of the world. Henrik, who sadly left us too early when he passed away in 2006, was a German businessman who lived and breathed football. He had connections throughout the game and would recruit former players like Jurgen Klinsmann, Alan Kennedy and Tony Morley to play for his Lorenz All Stars at Football Club’s annual Soccer Sevens. Henrik took his team on overseas tours and I was invited to be referee on one such trip to Venezuela and Cuba in 2001. Our final game in Cuba was at the national stadium in Havana. I recall vividly that the home team and match officials were bereft of money and we ended up donating all our kit and boots and every other piece of equipment we had.

I wound up being on the Soccer Sevens organising committee, which led to my bringing legendary manager Harry Redknapp – a friend of a friend – out to Hong Kong to speak at the pre-tournament dinner. That’s how I met Premier League referee Mike Riley, who had dropped in to watch some matches after taking charge of an important international in Australia. Mike loved Hong Kong so much he starting coming each year. After he retired from officiating and took over as head of the Premier League referees body, he would send a top official each year and we would organise the Boase Cohen & Collins Referee’s Lunch just before the tournament. We’ve had the likes of Chris Foy, Lee Mason, Phil Dowd and Kevin Friend speak at this event.

We went one better in 2018 when Martin Atkinson was the nominated referee. Martin was planning an epic 1,700-mile charity bike ride from England to the World Cup in Russia and Boase Cohen & Collins decided to give him a push start. Our lunch doubled as a fund-raising event which included an auction of football memorabilia – shirts signed by Frank Lampard and Wayne Rooney, match balls and programmes – which resulted in HK$134,100 going into the charity ride coffers. Martin was thrilled.

Continuing the theme of giving back to the game, for the past four years Boase Cohen & Collins has sponsored a group of young footballers on the outskirts of London as they undertake a personal growth journey under the devoted care of team manager Danny Harris, an old friend of mine. They now play in the colours of VCD Athletic U18s in the highly competitive Samba Youth League. Many of these lads are from disadvantaged backgrounds and football is giving them life skills such as respect, teamwork and sportsmanship as well as building their self-esteem.

Football has taken me around the world in support of Chelsea and England – the latter always in hope rather than expectation. I’ve been to countless tournaments and enjoyed the camaraderie and sightseeing as much as the matches. I spent five weeks at the 2018 World Cup in Russia and was planning on a month at this year’s Euros, now postponed for 12 months due to Covid-19.

As I await that showpiece, I will continue refereeing on Friday evenings at Football Club, keeping order in my Premier League match official’s kit kindly donated by Mike Riley, an outfit that imbues me with a heightened sense of authority. If you are a player, please enjoy the game and respect my decisions, otherwise I might have to show you the orange card. 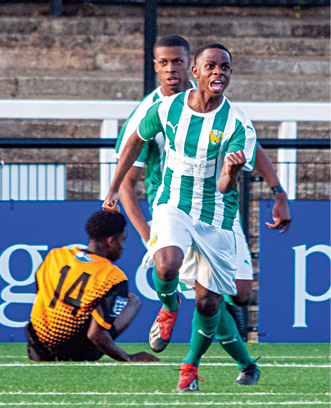 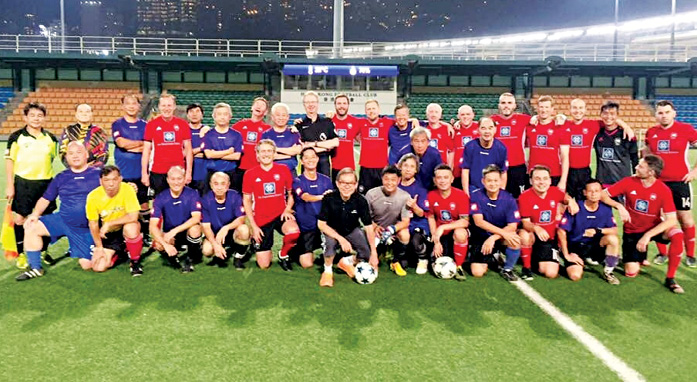 Colin Cohen with teams and of cials before a match at Hong Kong Football Club.

Colin co-founded the company that would eventually be called Boase Cohen & Collins in 1985, becoming Senior Partner in 2004. His key areas of practice include criminal proceedings and complex corporate crime, as a result of which he has co-ordinated defence teams on some of Hong Kong’s most high-pro le court cases. Recognised for his pro bono work, community outreach and commitment to various charitable causes, Colin was awarded the Hong Kong Medal of Honour in 2012.