Negotiate to Obtain a Favourable Result 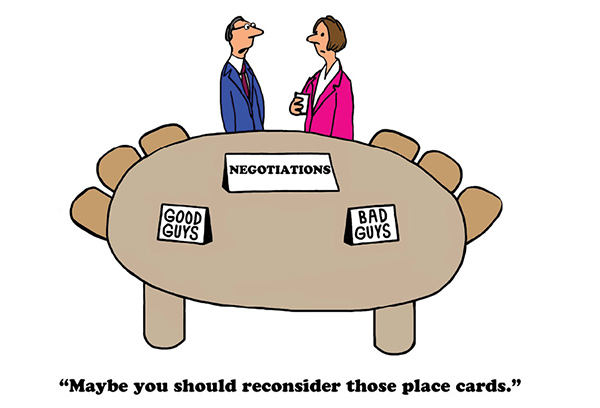 Often, people tend to categorise those who appear to be dominant and stubborn as “strong” or “good” negotiators and assume that it is impossible to reach any agreement with such persons. Some may find asking for what they want to be confrontational in nature and would rather avoid it than to feel awkward or uncomfortable. Some might dismiss any discussion, labelling a subject-matter as non-negotiable. However, the reality is that we all whether consciously or subconsciously bargain all the time in order to obtain a favourable result and “everything is negotiable” (Eldonna Lewis-Fernandez, Think Like a Negotiator).

For lawyers, attempting to strike a deal is unavoidable. There are various situations in which lawyers regularly negotiate. For example, discussing fee arrangements with clients and/or the adjustment of their fees; carrying out transactions or settlements on behalf of clients; discussing the nature and schedule of tasks to be undertaken; and assignment of tasks to their subordinates. Even setting an agenda for any meeting, which might appear to be relatively straightforward, may sometimes require some form of negotiation. For example, there could be disagreements in deciding the topics to address, the order in which they should be discussed, who should start first, etc.

The fact that lawyers negotiate regularly is not enough to master the art – it has to be honed. By becoming aware each time when in a situation that requires bargaining and with the adoption of certain techniques, lawyers might gain more confidence in trying to achieve a favourable result.

1. Authority. Imagine having spent time preparing for a meeting and then proposing your points to the other party. At the end, the other party is convinced but does not have any decision-making authority as he or she is merely representing the client who is absent. Simply knowing who is sitting at the table might not be enough. At the beginning of the negotiation confirm with the other party whether or not he or she has the authority to settle any agreement reached. This would save you the hassle of going through the entire negotiation process once again with the person authorised to settle.

2. Positive atmosphere. Commend the other side for agreeing to negotiate. Share in the beginning (and throughout the negotiation as you identify) any common ground between yourselves. For example, both sides might be at the negotiation table to avoid going to court and legal fees, or both sides might be concerned about their reputation, etc. Subject to their confirmation of the common ground, consider listing them on a board or on some paper that is visible to the parties. If at some point the negotiations turn sour, you may want to refer to the common ground to diffuse the situation and to recreate positive feelings.

3. Know your bottom line - make an informed decision. Accurately evaluate what the best and worst outcomes (commonly referred to as BATNA or Best Alternative to a Negotiated Agreement and WATNA or Worst Alternative to a Negotiated Agreement respectively) might be if no settlement is reached. The former helps you identify your position. You might try to improve your BATNA and approach your BATNA if no agreement is reached at the negotiation. With regard to the latter, if the other side’s final offer is less than your WATNA, you could walk away from the table. Furthermore, your flexibility to settle would largely depend on how you feel about your WATNA. Often however, we tend to assume or are unrealistic as to what our BATNA and WATNA are and therefore we may decline an attractive offer or walk away from the table unnecessarily. A comprehensive calculation including taking into account the costs, duration, etc. would help avoid negotiating poorly.

4. Active listening. All or at least most of us know how to listen, but active listening is different. Usually when comments are being made, instead of actively listening, we are likely thinking of how to respond to those comments. Instead, try to:

a. Make eye contact. By maintaining little eye contact, you may be perceived as uninterested, disingenuous or indecisive. On the other hand, too much eye contact might make the other side to feel uncomfortable or threatened.

b. Acknowledge. From time to time, nod your head, say “yes” or “uh huh” without being mechanical.

c. Rephrase. Use your own words to repeat what appears to be key points raised and to put a positive spin on any negative comments made. For example, Party A says “You have not paid my invoice for months!” Party B rephrases “So it is important for you to receive payments on time.”

d. Summarise what the other side has said from time to time.

e. Be aware of your body language. For example, try not to sit with your arms crossed as it may send a negative message.

Active listening is a powerful technique which might enable the other party to let off steam if any and appreciate being heard. It even works in personal relationships.

5. Give and take - everyone is a winner. Settlement agreements are usually entered into when all the parties feel that they are winning something and not losing everything. Abandon the “I must win all” attitude. But what do you give and what do you take?

a. Focus on interest rather than position. An important and necessary step in any negotiation is to ask why the other party is positional on his or her stance to establish his or her underlying goal. Also understand your own underlying goal. The classic example is where two parties quarrel over an orange. Merely suggesting that the parties split the orange in half may not work when one party wants the peel for baking and the other is interested in the pulp for juice. The more you ask, the more you learn about the other party’s interests.

c. Keep an open mind and think of creative options. It increases the number of solutions the parties can choose from (provided they benefit all the parties involved as explained earlier). It may also have a positive impact on the outcome of the negotiation as many win-win options can only encourage the other party (including the dominant kind) to consider settling or to engage by brainstorming more win-win solutions. Examples of creative solutions might include (on the assumption that these are valid and enforceable): setting-off, long-term contracts, short-term contracts, minimum turnover, maximum turnover, exclusivity or partial exclusivity, royalties, installments, right of first refusal, conditional pricing, barter, fixed rate or floating rate, etc.

d. Fairness. Solutions should be based on objective criteria instead of a party’s bargaining power. Use standards or principles such as market value, custom, business practice, independent expert opinion, etc. Even consider flipping a coin if you reach a deadlock (Roger Fisher and William Ury, Getting to Yes).

6. Embrace the power of silence. After sharing with the other side an underlying goal or suggesting an option to the other side, the room may become silent. It may become awkward or uncomfortable and there is an urge to promptly clarify or digress just to fill the silence, thereby conceding that underlying goal or option. Instead, although this might be one of the most difficult techniques to learn, try to smile, maintain eye contact and wait for 10 to 12 seconds. Bear in mind that one of the reasons for the silence in the first place might be that the other party is digesting what you have just shared with them or the other party may be thinking of a response. The other party may eventually also find the silence to be unbearable and be encouraged to speak his or her mind quickly and possibly reveal critical information.

Practice the negotiation techniques in front of a mirror and/or on your friends, family members, colleagues and relatives with an open mind. Read articles and books for an in-depth analysis and further techniques on negotiation. A personal favourite is the classic Getting to Yes by Fisher and Ury. The key is to plan, prepare and practice!