This month, we return to esoterica about members of Hong Kong’s legal community.

1. Geoffrey Briggs, Chief Justice of Hong Kong, had a fascination with which animal?

2. Which Hong Kong judge wrote a book “I’ll Do Better Next Time”?

3. Which Hong Kong High Court judge started his career as a member of the British South Africa Police in Rhodesia (now Zimbabwe):

4. Mohamed Saied, a Hong Kong judge, had to flee which country after being threatened with death in his previous role as Chief Jusitce of that country?

5. Which Hong Kong Chief Justice served as Attorney General to British Guiana prior to his appointment in Hong Kong?

6. Which current member of the Court of Final Appeal served previously as Chairman of the Hong Kong Bar Association?

7. Which Hong Kong judge served on the District Court of Palestine immedately before his appointment to Hong Kong?

8. Which Hong Kong Chief Justice served with the RAF during WWII?

10. Which Chief Justice of Hong Kong sat on the Anglo-Japanese Commission dealing with claims under the San Francisco Peace Treaty?

To be eligible to win a bottle of Ch. Roquettes 2010 (Grand Cru) or Ch. Tour Baladoz 2006 (Grand Cru) from Global Vintage Wines Centre, please send your quiz question answers to navin.g.ahuja@thomsonreuters.com. The first reader to respond with the most correct answers, with no more than 3 incorrect responses, will be deemed the winner. The decision of Thomson Reuters regarding the winner is final and conclusive. 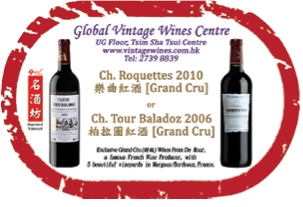 We would like to congratulate Kenneth K. K. Mo, Assistant Solicitor, Paul C.K. Tang & Chiu, Solicitors & Notaries, the winner of our Legal Quiz #45.