June 2020
From the Secretariat
Immediate Impact of COVID-19

Starting primarily as a public health problem, COVID-19 has since turned into a nightmare for nearly every sector and caused serious disruptions to most businesses. It has also resulted in serious implications for the global economic growth. For Hong Kong, the city’s real GDP for the first quarter of 2020 has contracted by 8.9 percent and the GDP growth forecast for 2020 as a whole has been revised downwards to minus four percent to minus seven percent. The unemployment rate was reported to have soared to 5.2 percent in the period February to April 2020, the highest in over a decade.

For the solicitors’ profession, a comparison of some of the statistics in the same period (January to April) in 2020 and 2019 may shed some light on the immediate impact that the pandemic has had on our sector.

On the basis of the statistics, more Hong Kong law firms have ceased practice and the number of unqualified staff engaged in local and foreign law firms have dropped in the first four months of 2020, compared with the same period in 2019. Further, there were fewer new foreign firms and registered foreign lawyers for the period January to April in 2020. The travel restrictions resulting from the pandemic have certainly played a role in the contracted growth of foreign firms and foreign lawyers. The growth of new solicitor members has also slowed down a little. This is mainly due to the general adjournment of court operations since 29 January 2020 during which admission proceedings have been suspended.

Looking ahead, the uncertainty of the pandemic, which could disappear in a matter of months or persist for years, has created immense pressure on businesses to find a way to cope with the combined risks of public health and economic recession.

The Law Society has introduced a wide range of relief measures for members. (http://www.hk-lawyer.org/content/united-against-covid-19)

The Government has launched the LAWTECH Fund (http://www.hk-lawyer.org/content/lawtech-fund-“ltf”) to assist eligible law firms and barristers’ chambers to procure or upgrade the information technology systems in their practice and to arrange technological training for their staff. The application period is until 26 June 2020 and eligible law firms are strongly encouraged to take advantage of this relief.

Another general relief measure available to law firms is the Employment Support Scheme (“ESS”) that the Government has introduced to help job retention.

If members have any queries on the application of the relief measures that you consider are also relevant to the profession as a whole, you are welcome to bring them to our attention and we can raise them collectively with the Government. For example, we have recently raised an enquiry on ESS with the Government and sought clarification as to whether the departure of a trainee solicitor from a firm due to the completion of his or her two-year trainee solicitor contract that results in a reduction of the firm’s headcount will attract a penalty on the employer under ESS. 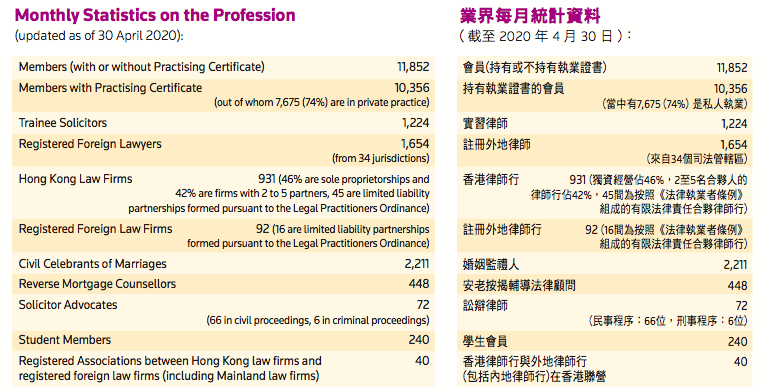