She’s broken barriers through virtually all of a marquee 50-year career as a lawyer, professor, judge and Chief Justice of the Supreme Court of Canada and now, months into what promises to be a busy retirement, Beverley McLachlin is one of the first two women to have been appointed as a non-permanent judge to the Hong Kong Court of Final Appeal.

It would be almost impossible to find a more qualified Canadian, or person, to fill the post in Hong Kong.

McLachlin was appointed to the Supreme Court of Canada in 1989 and served the last 17 years of her tenure there as Chief Justice, the first woman to hold the position. She retired this past December, about nine months before mandatory retirement at 75.

It did not take long before she was appointed to the Hong Kong court.

Baroness Brenda Hale, the president of the Supreme Court of the United Kingdom, was also appointed as a non-permanent judge to Hong Kong’s highest appellate court. The Hong Kong Court of Final Appeal can have up to 30 non-permanent judges that rotate. McLachlin will not sit on a bench in Hong Kong until 2019.

McLachlin’s presence on the Supreme Court of Canada for the better part of three decades and her 17 years as Chief Justice left an indelible mark on Canada’s system of justice.

She worked hard to expand access to justice, worked on Indigenous rights and the “development of a legal structure into which Indigenous rights can function,” she says during an unusual press conference last December to mark her retirement.

In 1990 she dealt with a prominent case of a teacher charged with promoting hatred that delved deeply into issues of freedom of expression. She has dealt with shield laws for rape victims and the fiduciary duties of doctors. She was on the court when it was asked to answer legal questions on the possibility of Quebec’s secession and when it passed a ruling in 2016 that set timelines for criminal trials.

FROM ALBERTA TO THE HIGHEST COURT

A few short years after joining the court, she emerged as a frequent dissenting voice and a prolific author of judgments. Hers was a strong voice that emerged from a small town in rural Canada.

McLachlin made her way to the pinnacle of the profession from a small town in the province of Alberta, known for its sprawling landscapes, ranches and oil.

“Growing up in a little town in rural Alberta, it helped shape me,” she says. “In some ways people are very surprised when people from small towns like that go out but it was a good town, a good education and a real sense that everybody had to work, pay their own way and very good values: Honesty, integrity, that kind of thing,” she says. “I was very fortunate, I think, to grow up where I did.”

“Your basic outlook on life and your values are shaped very early in life but your views on particular issues, political issues and so on develop as you get older. Your education plays a big role in that,” McLachlin adds.

McLachlin launched her career at a time when there were very few professional women and even less women lawyers.

“I don’t know why I felt that I wanted to have a different sort of life. It’s hard to say. It may have been those early times when I thought many women were confined. They might have been very bright and energetic, but they were so limited on what they could do and develop their full potential,” she adds.

“I decided very early on that these social restrictions that were placed on what women could do didn’t make much sense to me,” McLachlin says. “I guess that’s why I ended up taking a different path than a lot of women did.”

After graduating from the Allard School of Law at the University of British Columbia (UBC) in 1968, she went into private practice. In 1974, she became a professor at UBC, and in 1981, she left academia and took up a post as a BC County Court judge. Barely months after, she was appointed to the BC Supreme Court.

“I had good people to work with and very fair men in my early law firms and so on who moved me forward but in the system there was a lot more sexism than there is now and you had to prove yourself at every step of the way,” she recalls.

“You put your head down and go forward and don’t let the negative attitudes and expectations of others hold you back,” she says. “You walk into a courtroom and you feel a little outnumbered. You feel a little like it is alien territory. It is much better now but it was an interesting time.”

Much changed over her time in the profession, particularly in regards to women lawyers and women judges.

“When we got to four out of nine on the Supreme Court of Canada, I didn’t have any feelings of ‘impostor syndrome’ or being outnumbered. We were just judges and our gender didn’t matter. That was a lovely way to work and I was very pleased to have reached that.”

AN INTELLECTUAL BENT OF MIND

During her time as a professor, which started in 1974, McLachlin taught the law of evidence and wrote several books.

She says she enjoyed working with students and the intellectual aspect of the law. Her specific field allowed her to think about how the law works, how trials are shaped, how outcomes come to pass and what goes in front of a jury.

“I had always been fascinated by the process of the law and I was able to explore that a lot when I was teaching and apply it when I became a judge,” she says.

“When I accepted I thought, ‘well, I may be a county court judge forever’. And as it was, it was fine. I liked it. I had some interesting cases.”

Her tenure on county court was ever so brief. A month later “they moved me up to the BC Supreme Court.”

“You do feel the weight of responsibility. You wonder, ‘am I going to be able to do this job well? What are the elements of it?’” McLachlin recalls feeling when she joined the Supreme Court of Canada.

“And when you are Chief Justice, you feel like you are taking a responsibility for the court, making sure the court operates well and that the judges are all able to operate at their very best,” she says. “I took this job with the view that my most important job was to make sure that every judge of the court was able to be as good a judge as they could be.”

Sometimes it required helping a judge through a difficult situation or ensuing collegiality among her colleagues, basically “whatever I could do to make sure the court worked well as a cohesive unit.”

Another priority for her was to make sure that the public had confidence in the court.

“If the public doesn’t have confidence in the court, the court can’t continue to function as well as it should,” she says. “So, I worked very hard to make sure the public knew what we were doing as judges, how seriously we took things.”

This involved a lot of public speaking and public engagement as well as opening up the court a little bit more than it had been, by increasing access to journalists and working with them to get the stories right, as well as introducing plain-language summaries of decisions.

“It is very important the people be able to get to the court and use the court. We know that lawyers are expensive to hire, and we know that court cases can be delayed, but ordinary people should be able to access the court,” she says.

She feels that such access, and ensuring that people understand the rule of law, is not only important for justice but also for Canada’s democracy.

“We are trying very hard in Canada to get that message out, and it is getting out,” she says. “Everything is changing so fast these days and we have to keep the justice system relevant and functioning for most people.”

There are a lot more women in the legal profession than there used to be. In Canada, for one, while parity remains elusive, about one third of legal professionals are women.

With that said, women still face a number of challenges that cause them to drop out, particularly at the mid-career level when they may be having children.

“I think we need to do more to keep women in the workplace – help them with childcare responsibilities and that kind of thing. It is very important that women feel that they can have children,” she says. “Increasingly, we are seeing families where both men and women accept responsibility and it is not always the woman that is the default caregiver, resulting in her giving up her career.”

“It is a complex and difficult issue,” she says.

Her advice for young women just entering the profession?

“When you find that area, just stick with it. Even if you have to make compromises with someone, ask to work from home or do something different, don’t leave,” she says. “Kids grow up very fast, and if you want to have your place in the law you will still have it.”

In a very real sense, the posting in Hong Kong will extend a remarkable career in the justice system in Canada. Retirement from the Supreme Court of Canada is mandatory at 75 but the appointment in Hong Kong is one of many avenues open to McLachlin to “stick with it” well into her retirement.

And she says she is looking forward to her new role.

“I accept this Hong Kong appointment with humility and great pleasure and I consider it an honour and I will do my very, very best to acquit myself,” she says.

“My job in Hong Kong will be, as I understand it, will be to listen to the cases and apply the law and do so as fairly as I can and not to go in and change the system or anything like that. That would be for other people,” she says. “I am just there to participate very fully in the cases, I hope, and bring my best legal understanding and sense of justice.”

“I love Hong Kong. I read the work of the court and it is a very high calibre justice system,” she says. “The courts do great work and the judges are terrific. I’m looking forward to working with them.”

McLachlin’s ongoing five-decade-long career has been, in many ways, charmed.

“I’ve had the most wonderful, wonderful career and I could not have dreamed of it when I was starting out,” she says. “It’s been wonderful to have all these other opportunities, on the Supreme Court particularly.”

“I’ve got to deal with so many really important issues. And it was it was just an amazing opportunity,” she says.

A case in point was the Canadian Charter of Rights and Freedoms, which was put forward in 1982, a year after she became a judge.

“I had the Charter to work with for the whole of my judicial career. And I’m just so lucky in my timing and in my opportunities as they were presented,” she says. “I hope I will be seen as a fair judge who tried to apply the law intelligently and fairly and advance the law in certain areas during my time on the bench.” 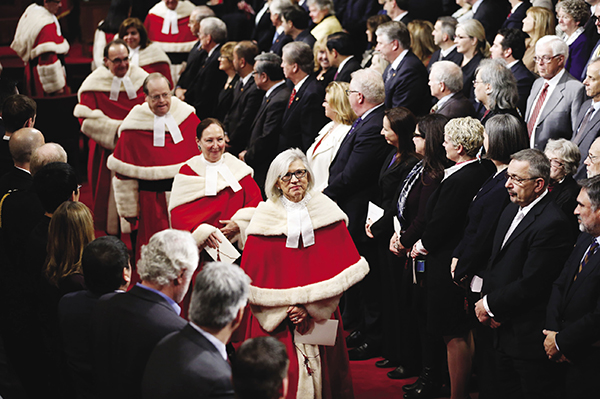 Canada's Supreme Court Chief Justice Beverley McLachlin leads the rest of the Supreme Court Justices through the Senate Chamber after the delivery of the Speech from the Throne in Ottawa, Canada December 4, 2015. REUTERS/Chris Wattie