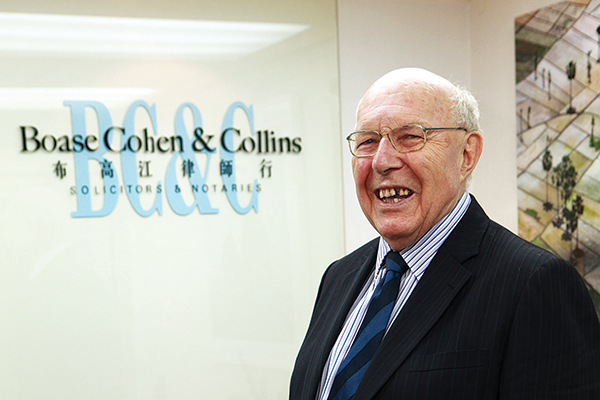 Melville Boase, co-founder of independent law firm Boase Cohen & Collins, has recently announced his retirement, but the Cornwall native still has plenty to keep him busy. A natural storyteller and passionate about domestic workers’ rights, Mel recently sat down with Hong Kong Lawyer to talk about his career thus far, and what’s next.

Born in the coastal town of Falmouth, “right down in the Southwest of England and famous for the arrival of the Tinkerbelle — a rowboat that came across from America”, Mel began his life living by the water. He remembers his early days and school years fondly. “I attended Falmouth Grammar School, which is notable establishment,” he says, recalling then headmaster Tom Morris’ insistence on “Oxbridge teachers” to guide the pupils.

“I had a very good education, I played rugby and was captain of the cricket team for two years. When I got the chance to go to university, I decided I wanted to go somewhere different from Falmouth, so I ended up applying to Liverpool — I arrived there in 1962,” he says. Of course, that was just on the precipice of Beatlemania. “I think we had the Beatles play for £50 in the first university rag ball, the following year in 1963 they wanted £5,000!”

During this time, sport was once again a constant pursuit, with Mel playing rugby throughout his undergraduate studies. But while he enjoyed Liverpool, he was soon to get a taste for studying abroad.

After being awarded a Gulbenkian Fellowship, he headed to Portugal to pursue a month’s summer course at the University of Lisbon’s International Faculty of Private Law, and later graduated with honours from Liverpool in 1965.

“Around the time I finished my degree the Falmouth Rotary Club was looking for somebody to put forward for an international foundation fellowship. They chose me and I was awarded a fellowship from Illinois, so I looked at the world map and, being a bit adventurous, chose Brazil.”

He spent a year at the University of Campinas, São Paulo, studying Private International Comparative Law. During this time, he travelled extensively, exploring a new country, but when it came to undertake his traineeship, the UK called him back. In 1970, he was admitted as a solicitor in England and Wales before stepping into full time work in South Wales.

“I got a house in Newport and a job with the firm WH Thomson. They were very keen on their employees getting ‘mud on your boots’ so we’d go out and visit the mines, factories and power stations,” he reveals.

But never one to be pigeonholed, he was soon ready for a change. “Having spent over two years with the firm, somebody then said to me ‘you ought to be on the side of the angels’, so I became an assistant county prosecuting solicitor with Gwent County Council. In those days, individual county councils chose whether or not they had a prosecuting section. Since then, they’ve introduced the Crown Prosecution Service, but in those days, it was down to individual counties.

“We were based in Cwmbran, which is a fascinating location. You’ve got Bristol, Newport and Cardiff as the main cities nearby, then to the north and south of Cwmbran you’ve got lovely countryside. There’s Chepstow to the east, where there’s plenty of hunting, fishing and shooting, then over to the west you have all the mining areas.”

While the work was interesting, Mel still felt the pull of overseas adventure. “The itch was there to leave the UK again,” he says. “At the time, when a job came up with the Hong Kong Government, I was married and had two young children and the employment terms were very good — accommodation, education, healthcare, everything covered, so we thought ‘nothing lost, let’s go’.”

Mel arrived in Hong Kong in 1977 as Crown Counsel for the Hong Kong Government. “I came out on a three-year contract. When I arrived the Attorney General was John Hobley QC, a very nice chap. He retired after two years and John Griffiths QC came in. He was a barrister from London and had a different style all together. He brought in four or five people he recruited to senior positions, which took away the major promotion prospects for people there.”

After completing his three-year tenure, Mel made the decision to leave behind government work and start something rather different. “I was 37 and I thought, ‘it’s time, you’ve got enough experience under your belt, if you’re going to launch a practice on your own, now is the time and Hong Kong is the place to do it’.

He joined forces with fellow solicitors Alastair Robertson and Peter Double to form Robertson Double & Boase in 1980 — today, the firm still exists, albeit with different management, under the moniker Robertsons.

In 1985, Mel decided to strike out afresh, setting up the firm that would eventually be called Boase Cohen & Collins with colleague Colin Cohen, now the firm’s Senior Partner. “Things went well and we grew and grew,” says Mel, noting they were fortunate in creating a solid team who enjoyed working together. “When you make it yourself and you choose people to work with, you can’t really complain and say there’s somewhere better to go to, can you?” he laughs.

He may have recently stepped down from his consultancy role but Mel still uses “we” and “us” as he sits in the Boase Cohen & Collins boardroom and explains the firm’s approach to team building. “One of my philosophies is you ought to have an atmosphere where people enjoy coming to work. Four of my partners signed as trainees and they stayed with us, a good number of the other staff have been with us for many years and we have a very low turnover.

“When we recruit we’re careful to ensure people are going to fit in and be happy working here and that our existing staff will be happy to have them here. It seems to work,” he says self-effacingly.

Asked to consider the different ways the Hong Kong legal market has evolved over the years, Mel cites the handover as having a major impact, with the city still adjusting. “The number one change in all my years has been the handover, but Hong Kong is simply following the pattern of a number of decolonised places. You tend to find the previous system continues working well for about 20 years but that generation passes on, another generation comes in and things begin to fray at the edges, which we can see happening here.”

While Mel has witnessed much change in the varied legal market through his work in government and private practice, there are some constants and one of these is the role of Legal Aid which, in his opinion, remains essential. “It helps those who are less well off and it helps the rule of law. It shows the idea that law is in reach of most members of the community.”

Since 1981, Mel has also been treasurer of the Mission for Migrant Workers, the registered charitable organisation based at St John’s Cathedral. He has assisted with countless cases, either pro bono or through Legal Aid, and it is a cause about which he remains highly passionate.

“We’re all strangers in a foreign land,” he says, before recalling how his volunteer work first came about. “We were living in a comfortable government flat. My first wife had employed an excellent domestic helper who would bring her friends around on a Sunday afternoon and some of them had problems which I heard about. I began to see what was happening. Then my wife started an agency and we saw more of what was going on.”

Concerned by the plight of some domestic workers, Mel stepped in, working with like-minded individuals to form the Mission for Migrant Workers. Almost four decades later it still plays a vital role in giving structured help and legal advice to Hong Kong’s huge domestic worker population and other migrants who are among the most vulnerable and exploited members of the community.

Today, looking back on a lifetime of labour in Hong Kong and beyond, Mel is happy he chose law, both for the work it has allowed him to do and for the unique insights it has given him into life and humanity.

“When I was in Brazil, a lecturer there said being a lawyer is like being able to sit on everyone’s shoulder and look into their lives — you can see so many different aspects of life. If you’re working in certain jobs you’ve got your workmates and that’s it but, being a lawyer, you don’t know who’s coming through the door, you don’t know which case you’re going to get or what the circumstances are.

“There’s a whole range of different aspects of life that you see and it’s never dull, there’s always something different. They say there’s nothing new under the sun and that may be true but, for me, many things are new.”

His advice for anyone considering a career in law is “do your best for the interests of the client before trying to make money”. Then he adds, “This is why so many lawyers become politicians, because you feel you can do something for people who have problems.” That said, he waves away any political ambitions with a laugh.

Boase Cohen & Collins remains a considerable source of pride to Mel and he clearly has a lot of faith in the team he’s left behind. “It’s been going for such a long time and we are fortunate to still have people of such high calibre. The firm’s future is very bright.”

While his daily involvement in the firm has ceased, Mel has plenty to keep him busy. He is continuing his work with the Mission for Migrant Workers as well as Voice for Prisoners, a charitable organisation supporting prisoners’ welfare. As a member of the Hong Kong Jockey Club he still enjoys going to the races, he is active in the Freemasons and regularly meets with his friends in the Pipe Club of Hong Kong.

When asked to reflect on the sentiment he lives by, Mel thinks back to the formative days of his legal career. “I lived in South Wales for six years and a common phrase there is ‘fair play’ — that is seeing that matters are fair, open and honest, that you get all the facts and all the factors are considered. This is a simple saying that keeps coming back to me.”

It has been a long journey from the Falmouth seafront – via Beatlemania, exotic Brazil and pre-handover Hong Kong – but Melville Boase has no intention of stopping for a breather just yet. Fair play to him, indeed. 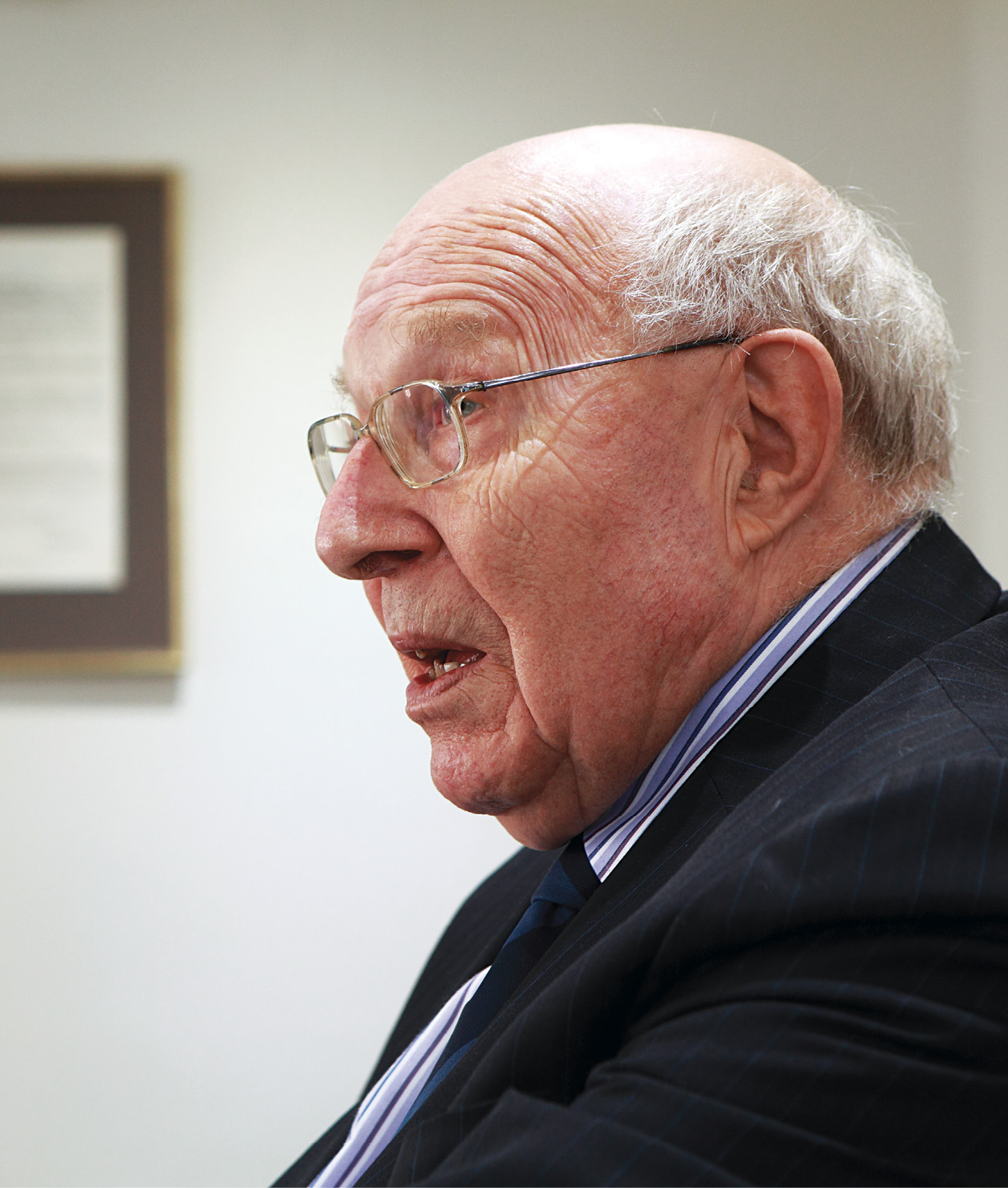 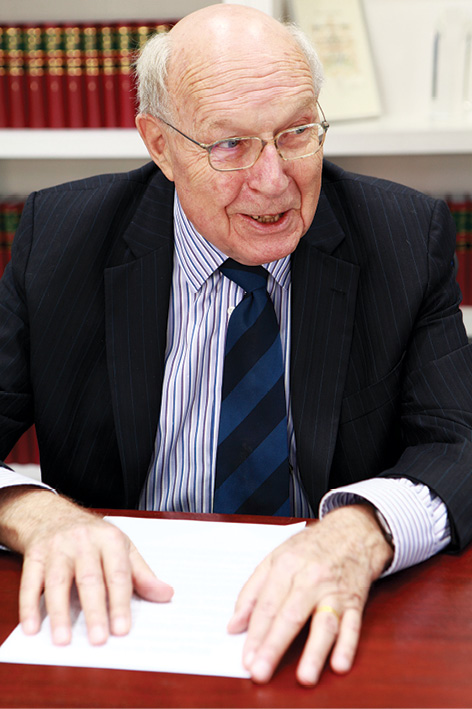