Curiosity has led Bonnie Chan Yiting through the myriad of zig zags in her career.

The current Head of Listing at Hong Kong Exchanges and Clearing (HKEX) was born and bred in Hong Kong. After earning her Bachelor of Laws (LLB) from the University of Hong Kong, she went to the U.S. to obtain her Master of Laws (LL.M) at Harvard University.

From there on, she charted what she calls an “unusual path.”

In and Out of the Legal Profession

Chan trained as a solicitor at local firm Deacons upon returning to Hong Kong in 1993. After that, she moved on to join Sullivan & Cromwell to practice as a U.S. lawyer. Her dual qualifications, which were not common in the 90s, allowed Chan to work in both their New York and Hong Kong offices.

Then, in the summer of 2000, she made a career switch by working as an equity capital markets banker at an investment bank. However, it was a particularly rocky time to be in that field.

“I was an equity capital markets banker for three years. But the timing was terrible because I joined in the summer of 2000, which was when the dot com bubble burst,” she recalled.

“Deals were actually drying out in Hong Kong and the Asia Pacific region, which was the area I covered. The only market, which was still producing deals, was Taiwan. So, I went there a lot from the year 2000 to 2002. I was effectively commuting between Hong Kong and Taiwan. And then when 2003 arrived, the market went from bad to worse because of SARS.”

Chan recalls that, by 2003, she had to “admit defeat.” This period, marked her return to practicing law.

“Fortunately, I found another job and I joined Morgan Stanley as an in-house counsel. I was partially reunited with law but not in private practice. I was covering the investment banking division, focused on capital markets as well. I did that for about three years,” she said.

And then, a different opportunity presented itself.

“I joined the Exchange in 2007 in the listing division and became the Head of the IPO Department at the time. Now the name has changed to IPO Vetting. Back then, I was leading a team of about 60 people. My primary responsibility was obviously to vet IPO applications and to work on IPO related policies,” said Chan.

She did that for a little more than three years until, once again, a private practice career beckoned. 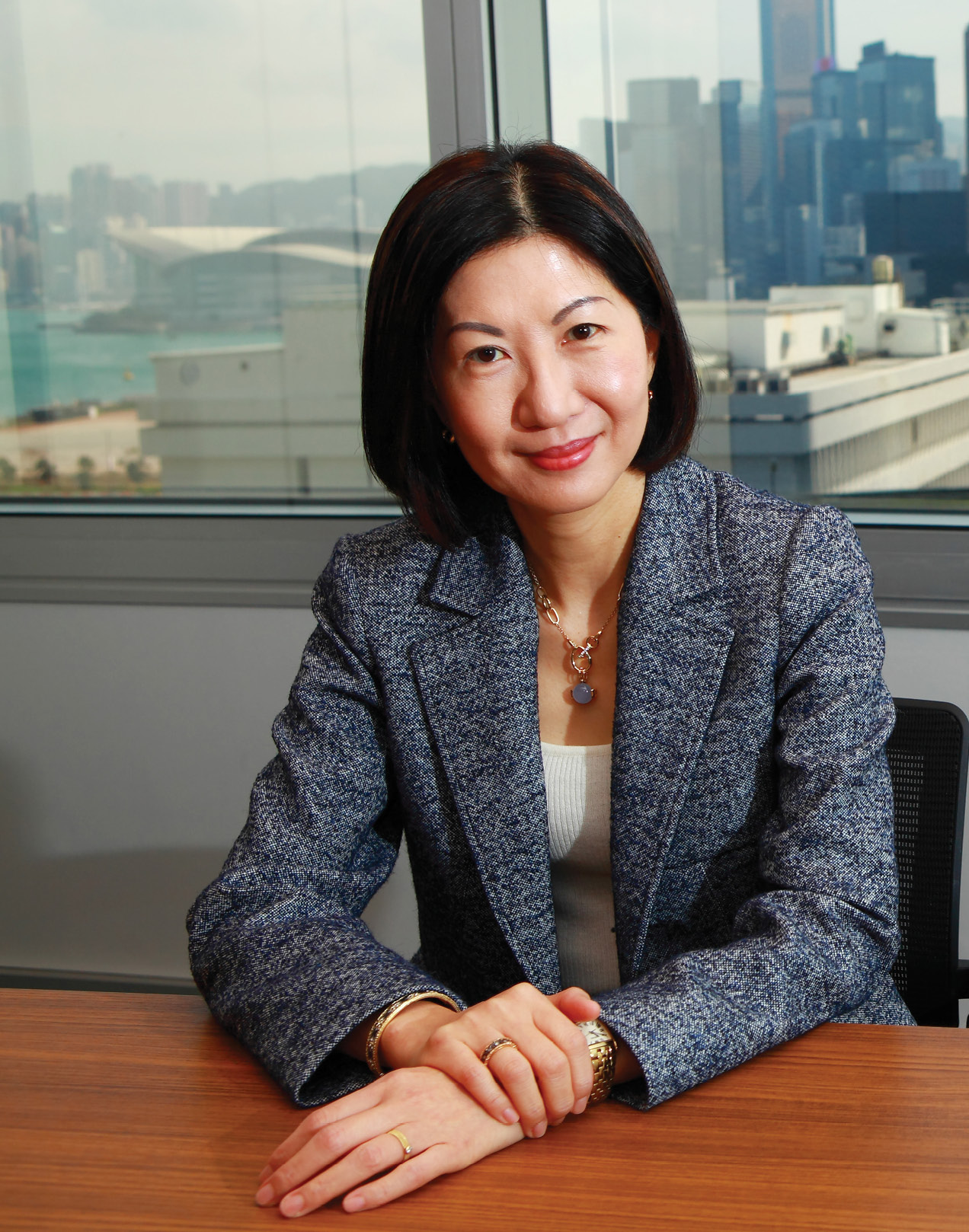 Back to Private Practice

“After 10 years, I went back into private practice. In December 2010, I joined Davis Polk & Wardwell as a partner. I was very lucky and honored really, that they asked me to start their Hong Kong law practice. The firm had already been in Hong Kong since 1993, but only practicing U.S. law, and I was there to start the Hong Kong practice,” said Chan.

She ended up staying for nine years.

“It was a very satisfying experience because I built a team. I remember when I first joined, the office had probably about 30 lawyers altogether. And when I left in December 2019, the office was about a hundred lawyers strong,” she proudly recalled.

She looks to this period and the opportunities it brought as the highlight of her career prior to returning to HKEX.

“The opportunity to build a practice from scratch and to groom a whole generation of lawyers for nine years is a highlight. I still remember a person who came in as a first-year associate and is now a partner at Davis Polk. To me, that is highly satisfying if you see both the firm and the people in it grow, especially the people, I will say.”

Chan joined HKEX at the start of 2020, a year that has been eventful to say the least.

A month into the job, she recalled being in London for the Lunar New Year when she received a message for an urgent work call.

“I remember picking up the phone and being asked to get on a call right away on Chinese New Year. Apparently, COVID was already showing signs of affecting Hong Kong. The accounting profession was very worried at the time because they have their auditing season, as companies had to announce their results no later than the end of March. But there were the travel bans and the borders closing, so they were very concerned because they would not be able to dispatch their staff to go to China and do audits. So, the concern at the time was will there be a massive failure right across about 2,000 listed companies?”

The rules make it clear that there are consequences if audits are not done in time, including the possible suspension of trading. And that could have massive impacts on listed companies and even the market.

“I understood right away that we had to come up with a solution. Thankfully, we were able to assemble the team, working with the SFC (Securities and Futures Commission of Hong Kong), and we went into a phase when we were doing active stakeholder engagement,” recalled Chan.

“My team was making calls to those companies, there were about 1,800 of them that potentially could have been impacted, checking in with them, providing guidance, etc.”

Chan and her team came up with some waivers and exemptions, where they decided to make sure that the market would stay informed, notwithstanding the fact that the audits may not be a hundred percent complete under HKEX’s usual rules.

“But we have given the market enough comfort that the information provided has not been compromised. So, with that, we avoided a major issue, fortunately. And, in the end, there were less than a handful of companies that were suspended for being unable to provide adequate financial disclosures to the market.”

She has since had to deal with the constant changes and the many curveballs that the pandemic has thrown her way.

“Like many other companies, we had to make arrangements for working from home, split teams and the like. For me, it is really to make sure that our market goes on. You can see that 2020 was a big year for HKEX and all the listed companies have continued trading through all these four waves,” explained Chan.

“We achieve it by really just being adaptive, staying close to my team, through conference calls and technologically-enabled solutions. Looking back, it’s all a bit surreal.”

Ultimately, she wants everyone to feel that there is still quite a bit of positive in the market.

“With all the present challenges, there are also opportunities. My advice will be to stay nimble, adapt, think, really look hard at the ways that you tend to do things. We lawyers are trained to follow precedents. So, there is always this tendency to look at how we used to do it right, and try to follow,” said Chan. “But maybe this is a time where we want to sort of break away from that and challenge ourselves to see if there are more disruptive and in fact, better and more efficient ways of doing things.” 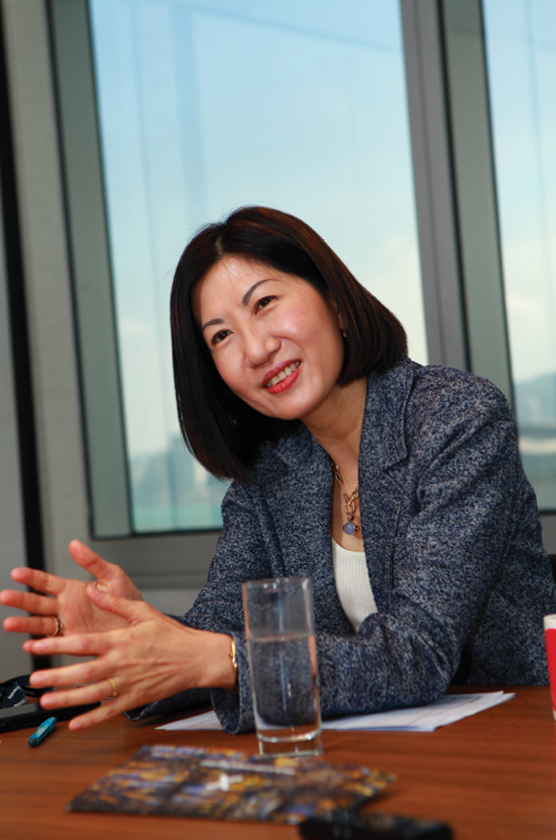 She points to the courts, which have made major adaptions and changes.

“I know courts this year are now doing remote hearings. Within my division, we do disciplinary reviews and we have Listing Committee members and Listing Review Committee members trying to participate while working from home. It used to be all physical, but now we have made arrangements to enable virtual hearings,” said Chan.

She sees this as the time to embrace technology and remain adaptive.

“You can’t assume that you can always do things the same way, right? I mean, people used to just jump on a plane and go to other places to meet people, do due diligence on their deals. They can't do that anymore. Does that mean we do nothing now? No! You find new ways of doing the same thing.”

After all, the wheels of finance will continue turning, and finding the best ways to adapt and keep up is one of her priorities at HKEX.

“One of the things we announced very recently was project FINI (Fast Interface for New Issuance), which is the initiative to shorten the settlement cycle for capital raising IPOs,” explained Chan.

“Right now, we have a T+5 settlement cycle. We are consulting the market to see if we can move from a T+5 to a T+1 model,” she said.

The “T” refers to the day when a new initial public offering is priced and the “5” to the number of business days until the stock begins trading. Markets like New York operate on a T+1 model.

In 2014, when Chan was part of the Financial Services Department Council (FSDC), she wrote a paper recommending the shift.

“Fate has it that I have to come back and finish off what I proposed six years ago.”

Fast forward, Chan notes that 2020 has been a challenging year for a lot of the lawyers with the initial slowdown in the market and the economy in general.

“I think there are sectors which are still trying to recover. But closer to home, at least, capital markets have held up quite well,” she said.

Chan describes herself as “still very bullish” about the market.

“In fact, I think 2020 has really demonstrated that the Hong Kong market is very resilient and that we're very adaptive. Therefore, I have no reason to believe that in 2021 we cannot continue the same momentum,” she said.

“Based on what I've seen, these trends like the biotech listings and the homecoming IPOs, the reason for them to list will be even stronger. I do think with that dynamic and geopolitical tension notwithstanding, I have hope that 2021 will be another strong year.”

In the long term, she sees an even brighter future.

“Hong Kong is obviously in an incredibly unique position to capitalize on the success of its motherland, China. I think everyone has seen how strong the recovery is to date on the mainland. So in the coming decade, I still see a lot of growth potential and solid momentum,” she mused.

Chan is keeping her sights on her goal of contributing towards making Hong Kong an international financial centre.

“We should always bear in mind the international elements in this title and play to our advantage. We are in a good spot in terms of connecting the world to China and China to the world. I think that will continue to be the focus in the next decade,” she said.

The good news is that she thinks there will be a lot of opportunities for lawyers, especially the younger generation.

“They should stay curious to stay relevant. Right now the Greater Bay Area has all these new initiatives, right? Have an open mind about it, go and take a serious look and see what opportunities there are,” she advises.

“My personal journey has a lot to do with the fact that I just want to find things out. Like how is it and what does it mean to practice law in the United States? What does it mean to become an investment banker, in-house counsel or regulator? So I think if young lawyers keep an open mind, they can embrace the opportunities that are right there.”

In her spare time, Chan continues to exercise her curiosity by exploring pottery and cooking.

Professionally, she believes that the capital markets, in particular, will be able to present young lawyers with a lot of excitement and professional satisfaction.

“I think that the learning part is what you will continue to do. Even though I'm in my 27th year of working, there are still moments when I’m caught by surprise.”

She says going to law school gives law students the necessary tools and skills to continue a lifetime of learning.

“We talk about spotting the issues, and finding the solutions, right? This is a universal skill that you can apply in every scenario,” she said. “So, don't stop learning, stay curious and I think it should be fine.” 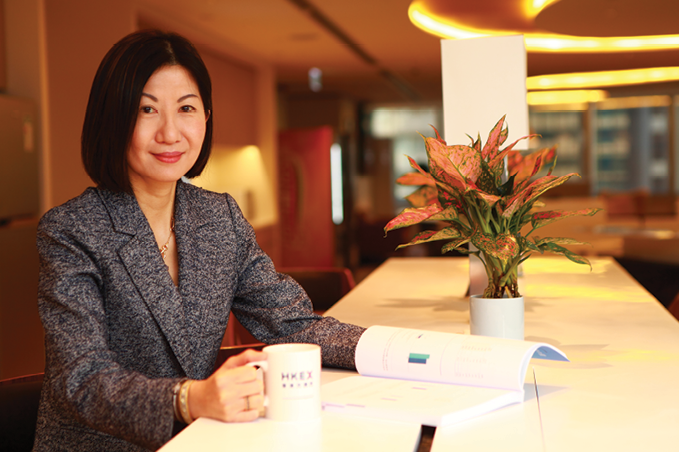