“Bitcoin is not “unregulated”. It is regulated by algorithm instead of being regulated by government bureaucracies. Un-corrupted.”

One of the key features that made Blockchain famous is the concept of a distributed decentralized network that provides immutable records, enhanced privacy, security, and transparency in its transaction. Whilst there is no central authority present to validate and verify the transactions (making it more credible and less susceptible to manipulation), blockchain-based transactions are at the same time unique in that transactions are both secured and verified.

The key to blockchain’s success lies in its consensus protocols which is at the heart of each and every blockchain network.

As you plan on where to have your next market, don’t forget to follow our Distributed Ledger Technology 101 series at the subscribe link provided. Your journey to Blockchain and Law begins here.

CONSENSUS ALGORITHMS | WHAT AM I?

A consensus algorithm is the process by which all the peers of the Blockchain network reach a common consensus about the present state of the distributed ledger. It is consensus (whereby everyone part of the network will need to agree with witnessing an event before a block is added) which ultimately gives blockchain its immutability reputation (this is as compared with traditional data keeping whereupon a hacker can simply alter a data set upon gaining entry to a system in a centralized system).

SUMMARY OF THE DIFFERENT FORMS OF CONSENSUS ALGORITHMS

“The Internet of Money, bitcoin, is releasing 50 years of pent up innovation in finance, because it offers innovation without permission.”

Accordingly, it is important to note the following forms of consensus algorithms and how each unique attribute may affect how blockchain is used (both in transactions and in the future of legal practices):

Applying in the legal practice, specifically, Common Law (including countries the likes of USA, UK, Hong Kong, Australia and various Indo-Pacific states), the fact that our various laws are built upon confirmed precedents is in effect a form of consensus programming (though much of the system is built upon non-technological means).

In an age of ever-growing big data, it remains to be seen how consensus algorithms can be applied to automate common law, thereby using technology to assist in the continued delivery of justice. With ever booming populations on Earth, which tends to create more disputes, the use of technology may be the ultimate trump card in alleviating our otherwise overstretched judiciary.

We hope you enjoyed the latest of our Distributed Ledger Technology 101 series. To stay tuned for more content, hit the subscribe link provided. Until next time. 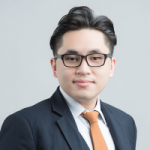