The Vis East Moot was held in Hong Kong from 7–13 March 2016. This year, 115 law schools from 31 jurisdictions in Asia, Europe, Australia, North America and South America, including top institutions such as Harvard University, Stanford University, Yale University, University College London, the National University of Singapore and Monash University participated in the competition.

In the competition, the CUHK team argued against teams from Germany, Indonesia, Sweden, India, Britain and Singapore. Apart from winning the championship – “David Hunter Award for the Law School Team Prevailing in the Oral Arguments”, the team was also awarded an “Honourable Mention (top 10 percent) for their Respondent’s Memorandum”, and an “Honourable Mention (top 10 percent) for Oral Advocacy” went to Hermia Chik, one of the oralists of the team. The win was the culmination of a remarkable rise since 2013 when the team made it to the semi-finals in the competition.

Professor Peter Rhodes, who has taken a team to the Vis East Moot since 2007, was very proud of his students’ great results. He chalked up the latest win to the students’ extremely hard work and their dedication to learning from each previous year’s experience. Professor Rhodes said “I am so proud of these students. As a group, from year to year, they are always striving to be better. Students from previous years help us with coaching in the succeeding years. A lot of team work goes into a win like this. Their success is richly deserved. This notable result proves that CUHK Law students have the ability to compete with the best teams in the world. Moreover, these mooting competitions provide an invaluable educational experience for our students and help develop them into mature professionals and outstanding advocates.” 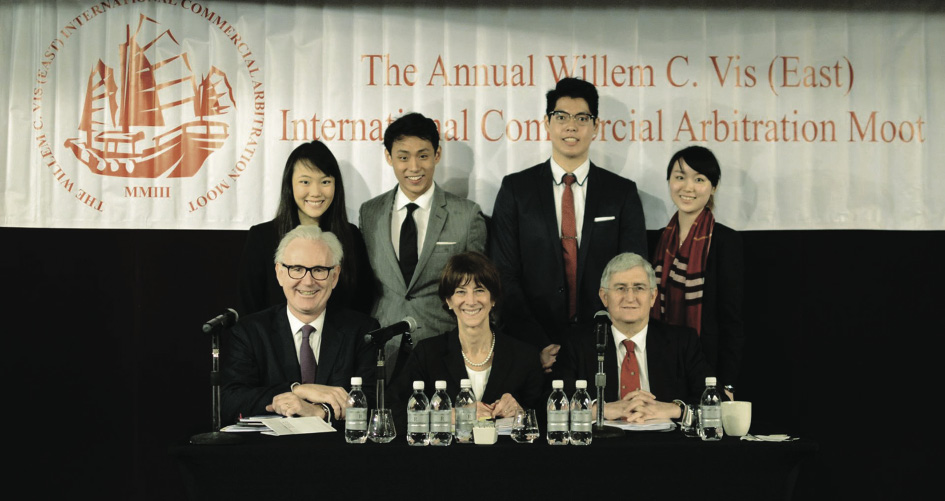 The three arbitrators (in front) and the CUHK team (right and 2nd right at the back).