September 2019
Lawyers at Leisure
Choking the Tensions of Legal Profession We all know how nerve-racking pursuing a legal career can be; all of us certainly have spent countless hours drafting an agreement or a legal opinion or answered client emails late at night after a hectic day of conference calls and meetings. The fact is that, if we do not police ourselves, our endless efforts to achieve a successful career can undermine our mental and physical health. Personally, I have chosen Brazilian jiu-jitsu (or BJJ as it is commonly referred to nowadays) to achieve a balance between my legal profession and personal life.

For someone from the country with most martial arts practitioners in the world, it is quite curious that most of the people who I met in this side of the planet have heard so little about BJJ (although there are several places in Hong Kong where you can practice and I have heard of quite a few schools running in China and Taiwan). To help you understand the dimension of BJJ’s popularity in Brazil, a 2013 government survey showed that back then the country already had around 5 million martial arts practitioners, of which 2.5 million practiced BJJ - that is four times the size of Macao’s population! In any event, those who never heard about this martial art may find the next couple of paragraphs interesting.

Brazilian jiu-jitsu (from the Japanese jujutsu) is a martial art based on leverage, torsion and pressure techniques that, if applied correctly, can dominate even the stronger and heavier opponents. This is possible as the fundamental purpose of these techniques is to use an opponent’s own power in your favor rather than using pure strength to physically dominate someone. This is the reason it is also known as the “gentle art” (ju meaning gentleness in Japanese, while jutsu means art, technique). Although there are different theories as to its exact origin (as it happens with other secular martial arts), it is commonly agreed that BJJ has its roots in feudal Japan where samurai warriors perfected a form of self-defense said to have been created by Buddhist monks 2,500 years ago to better prepare themselves for unfavorable combat situations. Many years later (in 1914 to be precise), Mitsuyo Maeda, one of the first jujutsu practitioners, arrived in Brazil and soon become friends with a fellow named Gastão Gracie. As a token of appreciation for the help Gastão provided in this new stage of Maeda’s life, Maeda decided to teach Gastão’s older son, a young man named Carlos Gracie, the techniques he acquired in his home country. Carlos eventually opened his first school in 1925, marking not only the official birth of modern jiu-jitsu but also the beginning of Gracie family’s very fruitful and admiring history as one of the most respectful clans in the martial arts community.

To distinguish a practitioner’s technical knowledge level from others and similar to other martial arts, BJJ has a merit-based system consisting of a sequence of distinct belt colors. Basically, for those above 16 years old, the journey begins as a white belt, and as he or she progresses, white stripes are earned and attached to his or her belt. With four stripes a practitioner can then be promoted to the next belt, that is a blue belt which is then followed by purple, brown and black belts. This level-tracking system applies to the entire belt chain, along with certain minimum time requirements applied to some of the belts, which must be fulfilled before a practitioner is promoted to his or her next belt. Worth noting that other belts succeed the aforementioned belt sequence and in sum are earned after several years as a black belt.

You may have concluded that it is every practitioner’s dream to one day become a black belt, but many people do not realise this path is arduous and involves spending a lot of time on the mats. It is hard to come up with an average number of years required to become a black belt as reaching this point depends on how committed you are to your training. Some can spend hours training every day, while others may be limited to training twice a week due to other life commitments. For obvious reasons, those who attend more classes most likely will achieve the highest skill level in BJJ sooner. What I can say is that most of the black belts I know reached this stage with over 10 years of consistent practice.

My Story with BJJ and the Benefits of Such Martial Art

My journey as a “gentle art” practitioner began at a rather late stage of my life, around five years ago in Brazil after giving in to my younger brother’s (a purple belt back then) prolonged pressure to start training BJJ (and, between us, in some part because I could not stand being submitted by him anymore!). I started in a small school in São Paulo and still as a white belt, was convinced by a friend to train with the team known as the biggest BJJ world champions called Alliance. There I earned my blue belt, made some great friends and was fortunate to train with world-class athletes. In Hong Kong since last year to pursue an LLM in Chinese Laws at the University of Hong Kong, I now train at SHBJJ (www.shbjjhk.com), a place where I met extraordinary people who I consider as my family (and who also happen to be tough training partners), and where I finally earned my purple belt.

Because I took the past year off from my legal practice in Brazil, my flexible schedule allows me to train every day from Monday to Friday. Each training session lasts one hour and is divided into three different stages starting with warm-up exercises, followed by the technical part of the session where we learn and practice different submission, transition and takedown techniques, and ending with sparring rounds that can vary from one to five minutes each depending on which aspect of our training the instructor wants to focus on (for instance, whether it is explosiveness or endurance). The sparring sessions are in my opinion the most satisfying part of the training as it is where you truly test yourself; as I described earlier, the fact that your training partner is stronger, heavier, faster or younger is irrelevant if you manage to apply a certain technique correctly. This is where the beauty of Brazilian jiu-jitsu lies. Choking a 220-pound person during an exhausting spar or pulling off an armbar on your training partner when you were clearly behind in a match are not only exceptionally rewarding situations but also reasons why this martial art is so addictive. That said, this addictiveness is not the only force driving myself to train every day, along with such lifestyle comes many benefits, some of which I describe below.

My story with BJJ began in a period in life where I was generally stressed due to work responsibilities. I had been recently promoted from trainee to junior associate at Demarest Advogados (one of the top-tier law firms in Brazil), which meant, among other things, many late nights in the office. In this sometimes-stressful environment, BJJ helped (and still helps) me blow off steam and by doing so also kept my mind sane. When you practice BJJ your “survival instincts” are triggered and the only thoughts you can think of are ways to attack or defend yourself. Hence, all that tension you might be going through outside the mats are set aside, at least for that part of your day. In this sense, BJJ is often described as a form of “forced meditation”. As you progress you realise how important it is to keep a healthy body and therefore, healthier eating habits are naturally developed. Also, whether because you are giving a hard time to higher-level belts or you see yourself with a healthier body, BJJ is often associated to improving self-confidence.

Training in a place with many unfamiliar faces or sparring with mean looking people can be one of the many reasons why training BJJ may seem intimidating. Be rest assured that this perception changes after a few weeks of training and I will briefly explain why. The constant physical contact in BJJ is one of the most powerful and influential experiences of such martial art as this physical contact not only releases neurochemicals in our brain and hormones throughout our body but is also the reason you will eventually see your instructors and training partners as great friends. I can say that in my personal experience, one of the many things BJJ granted me so far was the friendships I will carry for the rest of
my life.

As one of the most prominent masters, Hélio Gracie, once said, Brazilian jiu-jitsu is a philosophy that teaches you how to face life. This philosophy certainly helped me achieve a balanced lifestyle and for obvious reasons, it is one that I strongly encourage friends to experiment. For those who I managed to convince trying BJJ out, it would be a true pleasure to share this experience and take you to a trial lesson! 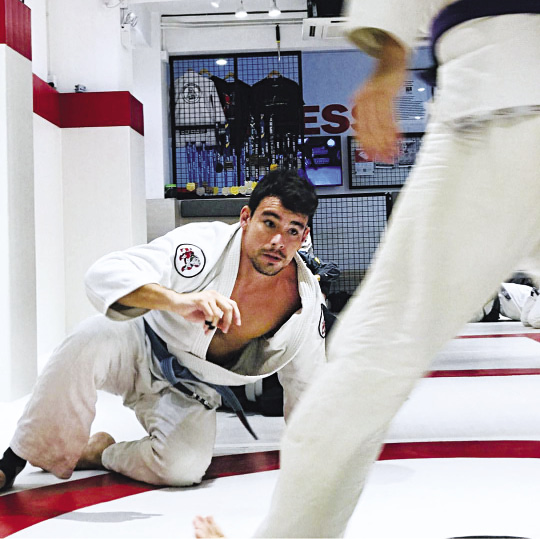 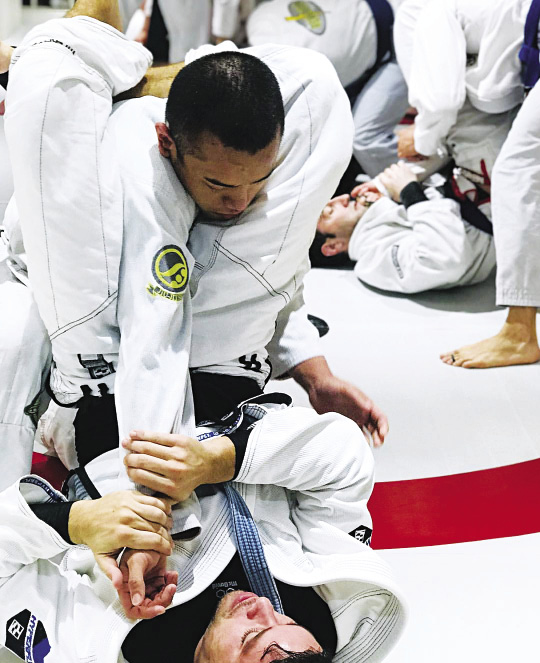 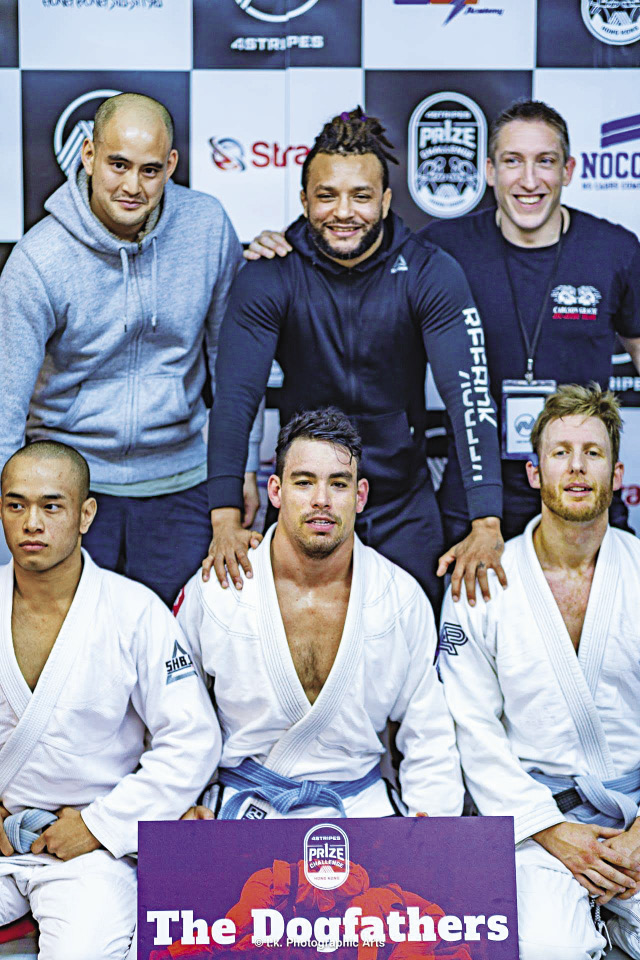