Great Britain’s acquisition of the New Territories, courtesy of the 1898 Convention of
Peking, was hardly a harmonious affair – perfectly understandable since the area’s 100,000 inhabitants had not been consulted about it. The formal taking-over ceremony on 16 April the following year, at a camp on a hill outside Taipo, took place amid fierce fighting. Several thousand men – bands of clan members supplemented with mercenary Chinese soldiers – offered uniformed, trained and armed resistance and caught the new rulers by surprise, first bombarding the camp with artillery and then attacking it in numbers. The British, with their modern weapons and superior training, plus support from the guns and crew of a Royal Navy destroyer, HMS Fame, quickly snuffed out the rebels, leaving some 500 resisters dead with the rest scattered to the hills.

Hong Kong’s new governor, Sir Henry Blake, knowing he needed co-operation from inhabitants if the new arrangement was to have any hope of working, was magnanimous in victory while clan elders who had organised the uprising quickly understood further resistance was futile. The two sides soon came to a working understanding, much of it based on pragmatism and mutual distrust, thus setting the template for the next century.

Vivid descriptions of those wild and chaotic times pepper the opening pages of Malcolm Merry’s new book, The Unruly New Territories: Small Houses, Ancestral Estates, Illegal Structures and Other Customary Land Practices of Rural Hong Kong, which offers what may come to be regarded as the definitive guide to Chinese custom and rule of law in the large expanse of land north of Kowloon.

The author, a barrister and adjunct professor in the Faculty of Law at the University of Hong Kong, expertly picks his way through the bewildering complexities that arise when incoming administrators are compelled to impose their modern rules and regulations on a civilisation that has been doing things differently for centuries. The divisions – and quite often they were yawning gaps – between local custom and common law form the backbone of this exhaustive study.

Essentially, the relationship between the rural landowners and the authorities downtown, both before and after 1997, has been a marriage of convenience. The former have been tenacious in asserting their rights, the latter have swung between appeasement and occasional confrontation, with each side only picking fights they think they can win. The author, with his natural appreciation of fairness and equality, does not hide his disdain for either party when he feels they overstepped the mark.

The Heung Yee Kuk, or Rural Representative Council, the foundations of which were formed in 1926, started out with the intention of promoting the welfare of the people of the New Territories, but the author notes: “Within a generation of the absorption of the area into the vibrant Western-style colony of Hong Kong, native leaders had resolved to exploit the opportunities it created. They have been doing so ever since. Making difficulties for the government has been part of their method, and a successful one.”

Similarly, he is somewhat withering in his appraisal of how the controversial Small House Policy – which makes land available at preferential prices to male villagers so they can build a house for their families – was presented and introduced by the government in 1972. The then district commissioner for the New Territories, Denis Bray, first negotiated with the Heung Yee Kuk and then drew up a confidential discussion paper for the Executive Council. The author concludes: “The overall impression given by the paper is of a subtly deceptive presentation of a sensitive change of position materially favouring one section of the rural population, dressed up as a major reform aimed at improving health and safety and preserving village identity.”

Having called out the Small House Policy in such fashion, the book details the inevitable building boom which followed and how a delighted Mr Bray attributed it to a “terrific pent-up demand for legitimate development”. Not so, says the author, who opines: “It would have been more accurate to say there was a terrific demand for speculative gain.” He goes on to devote an entire chapter to what he diplomatically calls “exploitation”, carefully avoiding more judgmental descriptions such as “abuse” and “misuse”, as one after another villager declined to live in his new house and instead sold it to an outsider at a handsome profit.

A further chapter is devoted to the lawfulness of the Small House Policy and here the author lasers in on gender inequality, stating: “The policy discriminates blatantly against women. Its discriminatory character has been implicitly acknowledged by the colonial Hong Kong government, the HKSAR government and the PRC government, each of whom have at various times excepted the policy from measures taken to combat sex discrimination.”

He concludes the book with a long lament regarding the state of the modern New Territories –swathes of land covered with concrete or hardcore, used as builders’ yards, car dumps, storage areas and container depots, or simply fenced off and left to the weeds. In surveying the ugliness of these “brown field” sites, he analyses how the administration lost control over the use of land in the last two decades of the 20th century as land values were rising, agriculture declining and cross-border trade booming. At a time when we are more aware than ever of the need for environmental protection, it is a sorry tale.

In summarising the unique history of the New Territories and the indigenous people living there, the author is typically forthright: “Looking back over the past 120 years, if one were seeking a distinguishing feature of rural people who can trace their ancestors to the villages of 1898, it would not be sense of place or reverence for the past but rather disdain for the rules.”

Malcom Merry is to be congratulated for bringing clarity and perspective to a hugely complex and often misunderstood subject. His comprehensive study is surely destined to become standard reading for law students and legal professionals alike. 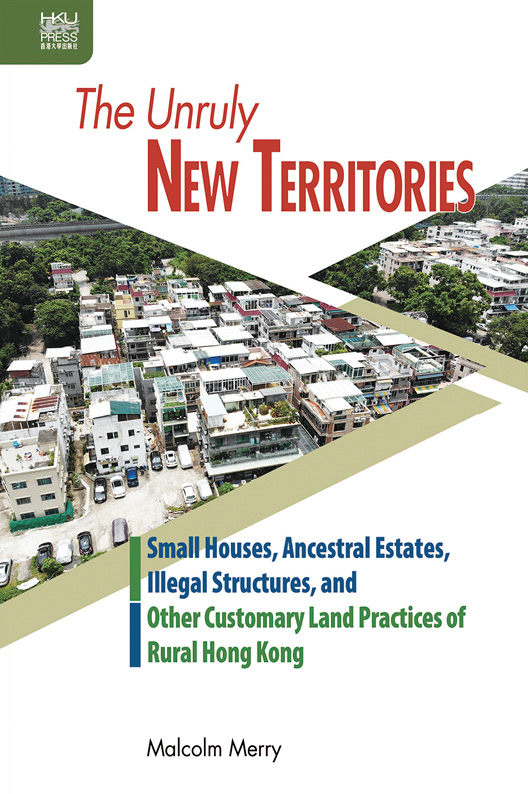 Fiona Chan is a Partner in Boase Cohen & Collins. She specialises in dispute resolution and is experienced in a wide range of civil litigation. Her core practice areas include conveyancing and property, Will drafting, estate administration and probate matters, while she is an appointed member of the Panel Solicitors for the Official Administrator.