The seminar shows that the avoidance to use the term “recognition” in the “Convention on International Settlements Resulting from Mediation” (baptised as “the Singapore Convention”) is not only due to different conceptions of the notion, but also because the premises underlying its use are absent in the context of iMSAs. It also shows the notion of “enforcement” in the Convention does not necessarily correspond to “enforcement” as traditionally understood in the context of private international law. Therefore, despite the apparent similarities between the different international schemes, this seminar argues that the uniform regime introduced by the Singapore Convention is fundamentally different from the legal frameworks that the New York Convention and the Hague Conventions provide for the recognition and enforcement of foreign arbitral awards and foreign judgments. 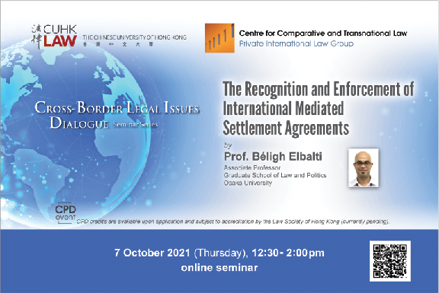