July 2020
Innotech
‘Why, Then the World's my Oyster’, Shakespeare

Innovation in the Evolution of an Idea

Shakespeare must have had a certain train of thought which inspired him to create that phrase. The active mind of a person reading that phrase will generate a progression of related thoughts and a parallel progression of unrelated thoughts leading to inspiration and innovation. Albert Einstein’s theories on General relativity inspired Stephen Hawking to theoretical predict Black Holes and the ‘Hawking radiation’. The radiation of information and ideas is in the innate nature of biological neural networks which make up a brain. In short, the brain naturally forms associations. A population of neurons interconnected by synapses produces a specific function, which when activated creates a neural circuit. A number of these interconnected neural circuits form a large-scale brain network. Essential to a neural circuit is the neuron. A brain network contains different types of neurons and one such neuron is the mirror neuron, which mirrors behaviour of others as if the observer was performing the same act. This mirror neuron is an essential feature in the innate radiation of ideas between brains. A related consideration for biotechnology is the Hebbian theory, a neuroscientific theory, based on neuro plasticity, which propounds that repeated firing of a synapse improves synaptic efficiency, immediately understood by the phrase ‘repetition improves/perfects memory and skills’ or ‘cells that repeatedly fire together wire together’. This will become key to the understanding the development of artificial neural networks considered later in this article.

Biotechnology is technology based on living systems and organisms where the biomolecular processes of microorganisms are utilised to make products. The earliest examples of biotechnology are cultivation of plants and production of antibiotics. Other disciplines in bioengineering have modified living organisms using principles of engineering and natural sciences on tissues, cells and molecules to improve biological functions. Gene splicing1 and the transfer of genetic material into a bacterium led to the development of case law in Diamond v Chakrabarty2 which allowed patent application for a genetically modified organism. Later developments include a biosensor and many others.

Biotechnology has developed into a rainbow of areas referred to by colours including green, white, blue and gold. Gold biotechnology refers to bioinformatics3 which is the science of informatic processes in biotic systems, first used to analyse biomolecular sequence data and later expanded into other disciplines encompassing computational structural biology and systems biology, including data integration and modelling of systems.

A radiation of ideas from observing neural networks has led to the science of bio-computers which use a series of metabolic pathways created through the synthesis of DNA molecules and other proteins to behave as inputs and outputs to form the basis of computational calculations whereby data storage, retrieval and processing is achieved.

In 1999 WL Ditto at Georgia Tech created a biocomputer using leech neurons and in 2013 Drew Endy at Stanford created a biological equivalent of a transistor termed ‘transcriptor’ which was the final component necessary to build a functional computer achieving data storage, transmission of information and a basic system of logic.

Patents have recently been filed for a cognitive machine, DABUS, which simulates human creativity akin to the Shakespearean example given above. DABUS uses artificial neural architecture composed of multiple artificial neural networks with many concepts forming in multiple parallel computers. The key is the way the concepts are detected, isolated and combined adopting the Hebbian theory explained above. This new AI concept combines simple concepts into complex ones resulting in a series of memories which express the consequences of such concepts or ideas. This is a new and different paradigm in computational architecture.

On a different track, Harvard researchers have achieved brain-to-brain interface (BBI) between a human and a rat, allowing a rat to be controlled through human thought alone. This BBI has been further enhanced by the use of focused ultrasound (FUS) directed at a specific part of the brain. Brain-to-computer interfaces (BCI) allow an enhanced or wired brain to communicate with a computer. A BCI can presently be experienced by using the Emotive neuroheadset which allows a person to control a computer or play a computer game through thought alone. Other haptic based technologies allow computers to be controlled through various tactile inputs. Combining human inputs to technology could enhance the ability of lawyers through cyborg technology. Cyborg technology itself could be developed further by biomimicry where the unique natural biology of insects could be examined for development of technology and cyborg technology. For example, the extra eyes of a bee were the inspiration for accurate colour recognition in cameras. The compound eye of a fly for development of three-dimensional imaging and the dragonfly’s targeting system for autonomous robots.

There is a long way to go before we see molecular scale computing based on neural networks being used in the legal industry. Clearly, it is unlikely to be a linear evolution, rather it will be erratic, partly biological, partly artificial, using mimicry to leapfrog and improve efficiencies for lawyers and law firms. This article opens the conceptual door for a bio Apple computer instead of an electronic Apple computer moving from electronic cyber space to biological cyber space, within law firms based on BioLawTech.

1 By Paul Berg at Stanford University 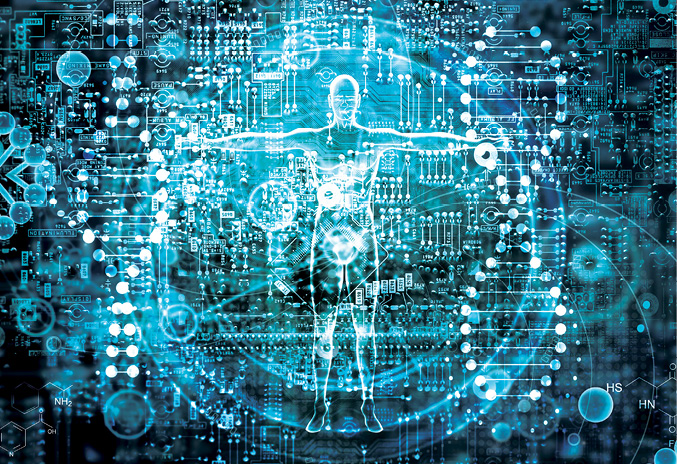 Chairman of the InnoTech Committee​